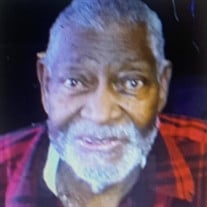 Willie B. Washington was born September 3, 1927, in Madison County, Alabama to the late Willie and Mattie Gilliam Washington. He departed this life on Sunday, December 19, 2021. He was preceded in death by sister Bessie Lee Washington and... View Obituary & Service Information

The family of Willie B. Washington created this Life Tributes page to make it easy to share your memories.

Send flowers to the Washington family.