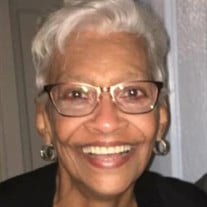 Celebration of Life Sylvia Christine Williams Kanoyton was born on February 7, 1938 in Detroit, Michigan, as the only child of the late Kenneth and Christina Williams. Sylvia also had a half- brother the late George Dwelle. As a young child, she accepted Jesus Christ as her Lord and Savior at St. Philips Lutheran Church in Detroit. She graduated from Detroit Northern High School and attended Highland Park Community College. As for her career, she was a fashion model for the Kanoyton Mannequins, where she modeled the latest women’s fashions. Afterwards she was a homemaker for many years, raising her children. Once establishing her family, she took a position in the automotive industry, working for General Motors and TRW. She retired in 2000. A lover of politics, Sylvia was a highly opinionated grassroots political pundit, who kept up with current events and social affairs. An active member of the United Auto Workers, Sylvia took an avid interest in equality and justice for women, minorities, and union workers. She kept up with policy and reform issues and treasured her voting rights. Sylvia always put family first. Her children and grandchildren were her pride and joy. She cherished every moment she could spend with them, including family dinners, holidays, and celebrations of academic and social achievements. She loved cooking and was excellent at it. Her home was also a point of pride and it was always immaculately clean. Sylvia’s heart was always open to those she loved, and her smile was warm and her laughter was infectious. She passed away peacefully on Thursday, June 18, 2020 with family in attendance at the Skld Nursing Home in Bloomfield Hills, Michigan. Sylvia is survived by her former husband Gaylord Kanoyton with whom she remained friends, their children: Gaylene Kanoyton, Lynne (son-in-law Jeffrey) Mills, Marlowe Kanoyton, and Nicole (spelling) Kanoyton. Sylvia was blessed with six grandchildren: Kai, Nigel, Julian, Michael-Tyler, and Jonathan. She also leaves to cherish her memory many nieces, nephews, in-laws, and other family members, and friends.

Celebration of Life Sylvia Christine Williams Kanoyton was born on February 7, 1938 in Detroit, Michigan, as the only child of the late Kenneth and Christina Williams. Sylvia also had a half- brother the late George Dwelle. As a young child,... View Obituary & Service Information

The family of Sylvia Christine Kanoyton created this Life Tributes page to make it easy to share your memories.

Send flowers to the Kanoyton family.