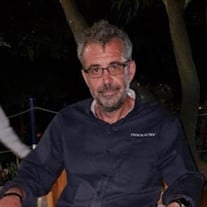 Steven Paul Charles Joseph Publius Graham Pearce was born 8 February 1960 to Raymond and Victoria Pearce in Floriana, Malta. He was educated in Northern Ireland and Colchester Comprehensive, formally known as Sir Charles Lucas School in Colchester, England. Following in his father's footsteps, he joined the British Army in 1976. Steve joined the Royal Corps of Signals at the age of 16. He attended Army Apprentices College, Harrogate, where he studied as a communication technician. During his military career, he was promoted to sergeant. While serving his country, he would travel the world, completing assignments in Germany, Italy, Belize, Central America, and the Falkland Islands, before leaving the Army as a Sergeant in 1990. After leaving the Army, Steve secured a position with Motorola UK as a technical instructor and trainer. In 1999 his career brought him to the United States, joining the Motorola US training team. Steve would spend the final years of his career at Modular Mining in Tucson, AZ. Steve loved to play and watch football, especially Arsenal. Win or lose, that was his favorite team. Steve is survived by his wife, Tracy (Dollie) Pearce; mother, Victoria(Vickey) Pearce; brother, Mark Pearce (Debbie); brother-in-Law, Dennis Reed; sisters-in-law, Kelli Wagoner (Christopher), Dannielle May (Jabari). daughters, Danielle Suarez,(David) Kirstie Pearce, Jasmine, Nykyla, and Robyn; son, Kyle, *Roozbeh (Golcehr); grandsons, David, Jackson, and Luca; nieces, Leanne and Lauren Pearce, Jasmine, Asia, Jaya, Jacey; nephews, Justin, Cameron, Christopher, and Jabari. A kind and sensitive man, he will be greatly missed by everyone who met him. May your pain and sorrow pass, and you can now be at peace. "Sleep well, my friend, sleep well." Zoom Instructions 1. Go to Kempfuneralhome.com. 2. Click on your loved one’s photo. You are now on their personal page. 3. You should see a tab labeled photo & videos (or it may be labeled media, depending on your device). Select that tab. 4. 5 mins before the service starts, you will see an icon labeled Webcast (or it may be labeled external video, depending on your device). Select the icon. 5. You will begin to launch into the zoom meeting. 6. Wait for host to let you into the meeting.

The family of Steven Paul Pearce created this Life Tributes page to make it easy to share your memories.

Send flowers to the Pearce family.