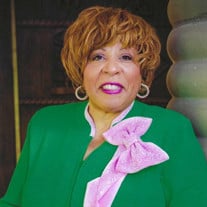 Ms. Starlett Turner Burrell was born on Sunday, July 17, 1955 in Detroit, MI to the late Edmond and Ethel Turner. Starlett was the fourth of five sisters. She is preceded in death by her third oldest sister Corliss Turner Henry. Starlett transitioned from this life on Saturday, July 25, 2020 at Royal Oak Beaumont Hospital. Starlett was a life long member of SS Andrew and Benedict Catholic Church, Detroit, MI, where she was baptized, received her first communion and was confirmed. Starlett attended SS Andrew and Benedict Elementary School in Detroit, MI and graduated in 1973 from Our Lady of Lourdes High School in River Rouge, MI. She continued her education at the University of Michigan, Ann Arbor where she received her Bachelor’s Degree. Later she received her Master of Science Engineering Management Degree from Embry-Riddle Aeronautical University in Daytona, FL. Starlett was initiated into Alpha Kappa Alpha Sorority, Incorporated at the University of Michigan on April 18, 1975 beginning a life-long and dedicated love of the sorority. In 1991, Starlett became a charter member of the Tau Alpha Omega Chapter, Redford, MI. During her 29 years as a Tau Alpha Omega member, she held many positions including President, Vice President and Parliamentarian. She also served tirelessly on many humanitarian committees as well. Starlett was a Silver Star and Life Member of Alpha Kappa Alpha Sorority Incorporated. Starlett retired from the U.S. Army Tank Automotive Research Development and Engineering Center in 2018 after 33 years of decorated service with the Department of Defense. Starlett leaves to mourn her cherished memory; her sisters Rita Spuling (LeRushlon), Alma Smith (Vernell), Lynett Marie Sluis (Wilbert), her nephew Desmond G. Henry, her niece Juliette Henderson (Joseph), niece Stacey Snow and great niece Anayla Henry. Starlett also leaves a host of cousins, relatives, caring friends and her beloved sorority sisters. Information about the Visitation is listed below. The funeral will be a private ceremony, due to coronavirus restrictions, for immediate family only. Funeral Services will be live streamed at 11 am on Saturday, August 8, 2020 on Facebook at facebook.com/SSANDBEN , or the church's website: SMMSSAB.com and choose "Masses". You will see Mass of Remembrance for Starlett Burrell. In lieu of flowers, donations may be made to the "Starlett Burrell Scholarship Fund" with checks payable to the Vision Fair Foundation, a 501c3 organization. Vision Fair Foundation PO Box 401124 Redford, Michigan 48240 PayPal: [email protected] Condolences and Expressions of sympathy may be sent to: Mrs. Alma Smith 23468 Derby Lane Farmington Hills, MI 48336 **Please note that the Strolling Visitation allows 10 people in the chapel with the family at a time. After viewing and expressing condolences with the family, it will be necessary for visitors to leave so that others may come. The governor's orders do not allow congregating in the halls, lobby or parking lot. Let us do our part to stop the spread of the coronavirus. Thank you in advance for your cooperation.

Ms. Starlett Turner Burrell was born on Sunday, July 17, 1955 in Detroit, MI to the late Edmond and Ethel Turner. Starlett was the fourth of five sisters. She is preceded in death by her third oldest sister Corliss Turner Henry. Starlett... View Obituary & Service Information

The family of Starlett Burrell created this Life Tributes page to make it easy to share your memories.

Send flowers to the Burrell family.