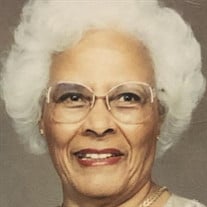 The Obituary Ruth Nowell Shuford August 3, 1922 ~ July 16, 2021 Ruth Nowell Shuford was the second eldest child born to Percy A. and Claudene Hillman Nowell on August 3, 1922, in Monroe, GA. Percy and Claudene left Georgia in 1923 for Michigan with their infant daughter Ruth. Percy and Claudene were always active in their church, and they made certain that Ruth and her siblings were always there in church with them serving the Lord. Ruth was Baptized at an early age and became a vital part of First Community Baptist Church located in NE Detroit. After settling in Northeast Detroit, Ruth attended Detroit Public Schools for her general education, she also attended Wayne State University. While Mrs. Shuford was in St. Louis, she received her associates and later she enrolled at Washington University where she earned her degree in Civil Service and Public Policy. Ruth married William Shuford Sr. on February 14, 1941, and with this union they were blessed with three children: Beverly Ruth Sullivan, William Jahad (Mickey) Sankofa Jr, and Lenore Iverson. In 1954, Ruth became a vital part of the United States’ Army Tank Automotive and Armaments Civilian Command. Ruth received the “Downtowner’s Woman of the Week”. She was a public servant working for the Department of the Army. Her assignments were at ALMSA (Automated Logistics Management Systems Agency) as a Systems Analyst. She was also the president of the ALMSA Management Club, and the 1st vice president of the National Federation of Federal Employees, Local 1763. Prior to the time, she was nominated by ALMSA for the Greater Metropolitan St. Louis and the National Federal Employee of the year awards. Mrs. Shuford was promoted to the Department of EEOO and served as an Equal Opportunity Officer and Equal Opportunity Counselor. At that time, she became an indispensable part of the EEOO and eventually, retired from the St. Louis, MO office and came back to Michigan in 1984. After her retirement she moved back to Detroit and later she had a home built in Peoria, AZ and lived there for a while. Mrs. Shuford was an active member of the Metropolitan United Methodist Church in Detroit. She later became a member where her son-in-law served as Senior Pastor at Historical First Baptist Church in Windsor, Ontario Canada. She was then appointed to the position of Church Mother at New Living Truth Ministries in Center Line, Michigan. She enjoyed working with the Women’s Ministry, the annual Church Picnic Committee, and the Pastor’s Aid Board. Ruth was also an avid lover of sports! Ruth’s health began to fail in 2001 while living in Arizona. This is when decisions were made for her to return to Detroit to be with family. Ruth’s youngest daughter Lenore made the commitment to care for our mother for over 20 years. Lenore’s dedication was to care for her mother until God said, “It’s time to rest my child”. Mrs. Shuford gained her wings on early Friday morning July 16, 2021. Ruth’s life was certainly a true and living legacy for her family. Ruth was the last child in her family being pre-deceased by her brother Percy A. Nowell, Jr., Bernice Nowell, and Vivian V. Jones and Charles Hillman Nowell, a cousin who was raised with Ruth as a sibling. She leaves to cherish her memory two daughter’s: Beverly Ruth (Rev. Michael) Sullivan, (William Jahad Sankofa Jr. (Mickey), D-2014), and Lenore Iverson. Seven Grandchildren: Krystal L. (Bill) Banfield, Fred L. (Erica) Prime, III, Willie J. Iverson, Jr. (Ike), Leslie Ruth Prime, Marcus L. (Kirsten) Iverson, Monique Stephen, William Shuford III, seven greatgrandchildren, and three great-Great grandchildren. Pallbearers Fred L. Prime III Willie J. Iverson, Jr. Marcus L. Iverson William Shuford III William Banfield Honorary Pallbearers Christiano Badon Fred L. Prime IV Dylan Prime Martin Finley III Flower Bearers Krystal L. Banfield Leslie R. Prime Monique Stephen Erica Prime Kirsten Iverson Honorary Flower Bearers Domonique Stephen Madison Iverson Maci Iverson

The family of Ruth Nowell Shuford created this Life Tributes page to make it easy to share your memories.

Send flowers to the Shuford family.