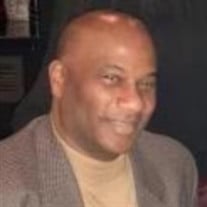 Roosevelt Dwight Smith was born on March 1, 1958 in Murfreesboro, TN to the union of Roosevelt and Emma Smith. Roosevelt was the youngest of three children. As an Air Force brat, Roosevelt moved around often as a child – living in Washington, D.C., Springfield, MA, Holyoke, MA, Fort Worth, TX, and finally landing in Detroit, MI in 1968. Roosevelt graduated from Cass Technical High School in Detroit, MI, where he met the love of his life, Diane Powell. Upon graduation, he attended the University of Michigan on a full athletic scholarship for football. Roosevelt began his walk with Christ at an early age and was baptized in 1969. Throughout life he continued to worship in the church and spent time serving in multiple ministries. His passion for Christ continued throughout his life and eventually grew from developing his relationship with God, to leading his family closer to God as well. In 1982, Roosevelt and Diane married. To this union, two amazingly beautiful, smart, and talented girls were born – his words, not ours lol. Roosevelt and Diane made sure their girls, Stefanie and Stacie, had the best in life. His daughters had full confidence that they were his number one, unless of course there was a conflict with his first number one, Diane. He prayed daily for his family and always reminded them that they were blessed, highly favored, anointed to prosper, and had favor with everyone they came in contact with, in Jesus’s name. Roosevelt became known as Rosie in Fort Worth, TX. It was at this point when it started becoming apparent that Rosie Smith excelled in everything he did. Having begun playing football, it was clear early on that Roosevelt’s athletic abilities were stellar. From track to swimming to baseball, Roosevelt stood out as a champion. After a successful football career at the University of Michigan, he went on to play professionally for the Dallas Cowboys and Denver Broncos. After time in the NFL, Roosevelt had a phenomenal career in corporate sales. For multiple years Roosevelt was number one in sales for the country and he won President’s Club on numerous occasions. Even more, he loved teaching success and character development to teens through his motivational speaking organization, Positive Perspectives. Excellence with positive impact was simply his way of life. He was known for his powerful voice, but peaceful presence whenever he entered a room. He was a loyal, faithful friend and a bright light to strangers. He was the epitome of a husband and father; and a great inspiration to young men who did not have the right example in their lives. This element of his life was noted and admired consistently. His greatest pleasure was to do anything that his girls – Diane, Stefanie, or Stacie – asked him to do. He loved when his girls said, “we were going to do something” because it really meant that “he was going to do something”. This even included coming out of retirement to help Stefanie start her entrepreneurial endeavor, Alpha-LIT Detroit. The consistency of Roosevelt’s great character throughout his entire life was undeniable. Roosevelt leaves to cherish his loving memory, his wife, Diane; two daughters, Stefanie and Stacie Smith; sister and brother, Nina Harrell and Tony Smith; A host of in-laws, nieces, nephews, and friends; and a granddog, Pepper Mynt. We will love you always and forever.

Roosevelt Dwight Smith was born on March 1, 1958 in Murfreesboro, TN to the union of Roosevelt and Emma Smith. Roosevelt was the youngest of three children. As an Air Force brat, Roosevelt moved around often as a child &#8211; living in Washington,... View Obituary & Service Information

The family of Roosevelt Dwight Smith created this Life Tributes page to make it easy to share your memories.

Roosevelt Dwight Smith was born on March 1, 1958 in Murfreesboro,...

Send flowers to the Smith family.