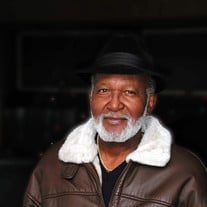 THE GAME OF LIFE FIRST QUARTER Robert Maclin Bibb was born on March 27, 1923 in Jefferson County, Alabama from the union of the late Effie (Brown) and Ed Bibb. He was one of a total of fifteen children. As a young man, Robert was extremely industrious. In fact, at one time, his paper route was so profitable that he was able to supplement the family income. During his early years, Robert played with a local baseball league in Alabama. He was educated in the Birmingham Public School System and learned about Jesus Christ through his Mother, Effie, who was an evangelist with a fervent Christian faith. SECOND QUARTER Robert met his first love, Emily Morgan, while growing up in the same neighborhood in Birmingham. They eloped on December 6, 1941 and were blessed with two daughters, Robbie Jean and Carolyn Adele. Robert followed his younger brother Curtis into the military, served during World War II and later relocated to Detroit, Michigan in search of a better life for his young family. After serving his country and being honorably discharged from the U.S. Army, Robert earned his GED at Cass Technical High School in Detroit, Michigan. THIRD QUARTER Always the hard worker, Robert maintained two jobs to provide his family with a good life. Later he was employed by, and eventually retired from, the U.S. Postal Service - providing 40 years of dedicated federal service. A lifelong learner, Robert taught himself many hobbies - including photography. He had a fascination with technology and fully appreciated all the latest gadgets that sparked his curiosity and broadened his mind. Albeit modest, Robert took a lot of pride in his personal appearance and was admired for his unique sartorial style. As an avid fan of all sports, Robert’s lifelong passion was watching a variety of sports on television. Those who knew him well appreciated Robert’s knack for engaging in a lively and spirited debate about sports, politics, religion and everything in between! FOURTH QUARTER Robert was generous by nature and stressed the importance of education to his family members. He financially supported the educational and personal goals of his children, grandchildren, great granddaughter and many family members and friends. Better known as “Uncle Bob,” Robert was the patriarch of the Bibb/Robinson family and maintained a close relationship with numerous nieces, nephews, and other family members. He took great pride in his home that he owned and meticulously maintained for over 50 years. OVERTIME The last of his siblings to depart this life, Robert transitioned on November 3, 2020 at the age of 97. He was also preceded in death by his parents and daughter Carolyn. He leaves to cherish his memory and continue his legacy: a daughter Robbie Best (Arnold); a son Devin Wesley Gresham (Joy Lynn); two granddaughters Nicole and Robin Fields; one great granddaughter Morgan Wesley and a host of nieces, nephews, family, neighbors and friends.

THE GAME OF LIFE FIRST QUARTER Robert Maclin Bibb was born on March 27, 1923 in Jefferson County, Alabama from the union of the late Effie (Brown) and Ed Bibb. He was one of a total of fifteen children. As a young man, Robert was extremely... View Obituary & Service Information

The family of Robert M. Bibb created this Life Tributes page to make it easy to share your memories.

THE GAME OF LIFE

Send flowers to the Bibb family.