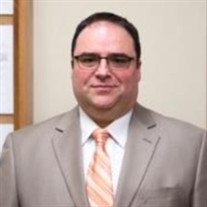 Richard A. Young was dearly loved by all who knew him, especially his family. He died peacefully at home with his beloved daughter, Antonia by his side, on Saturday September 12, 2020. Richard was the oldest of three children to Gary A. Young and Marsha Seagraves (Preceded in death). He was affectionately known by many as Rich or Richy. He will be tremendously missed. Rich was educated within Lansing Public School District and graduated from Everette High school in 1987. A few years later he dedicated his life to serving Jehovah God and was baptized June 23, 1990 at the Pontiac Silverdome. He spent the rest of his life serving Jehovah, enjoying Conventions and Assembly’s with friends. He became a father by choice in 1991 when Antonia was born. He continued to lovingly raise her despite any challenge that arose. As a single parent he made sure she was present at meetings and in the ministry, so that she too would serve Jehovah as he did. Through the years he proved to be an excellent father, doing anything necessary for his daughter. He worked hard to provide for her and to set her on a course that would lead to a successful life of service to Jehovah. His love and concern for her continued all of his life, extending eventually to his son in law Loren too. In addition to his daughter he had his boys. Teddy and Levi his Toy poodles who he loved and cared for. Rich also took pride in working in Sales for various communications companies including Comcast. He was thought highly of by his coworkers, and is remembered by them as a hard worker and an enjoyable person to be around, He was great at talking with stranger’s door to door about cable, and other times the Bible. Rich had 2 main hobbies that everyone knew him for, Roller Skating and Cars. He was a regular at Edru Skating Rink on Wednesday nights for many years. Early in his life he did body work on many muscle cars, and like his mother he loved driving them. Together they spent time going to car shows around the State. His favorite car was the all black 1972 Chevelle SS. He enjoyed just about every car show you could find on T.V. and loved talking about cars. He bought and sold many cars over the years and more recently loved Mustangs. His cars ranged from Nova’s, and other classic muscle cars to Iroc Camaro’s, SS Camaro’s, and various Mustangs including his GT. Even when his health began declining, Rich would continue to spend time searching for cars and was able to attend the Woodward Dream Cruise every year since 2014. He also enjoyed going out to eat and treating family friends. Some of his favorite places were Smokey Bones, Famous Dave’s, Los Tres Amigos, and House of Ing before it closed. Rich worked hard but loved to laugh and crack jokes. He leaves to cherish in his memory his father: Gary A. Young (Esther); his daughter: Antonia Dukes (Loren); his siblings: Robert Young, Amy Seagraves; his niece Katelyn Herritt, and Nephews Michael Torres (Jennifer), Mathew Williams, and a host of Aunts, Uncles, Cousins and friends.

Richard A. Young was dearly loved by all who knew him, especially his family. He died peacefully at home with his beloved daughter, Antonia by his side, on Saturday September 12, 2020. Richard was the oldest of three children to Gary A. Young... View Obituary & Service Information

The family of Richard Young created this Life Tributes page to make it easy to share your memories.

Richard A. Young was dearly loved by all who knew
him, especially...

Send flowers to the Young family.