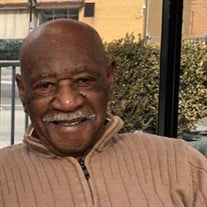 Our kind and loving father, Oliver Lee Howard, 88, passed away on February 16, 2022 in Southfield, Michigan. He was the husband of the late Hortense Howard with whom he shared 62 years of marriage. Born in Detroit, Michigan on June 22, 1933, Oliver was born to Gus and Charlena Howard. The youngest of twelve children, his father affectionately referred to him as “Our Boy”. In 1952, at nineteen years of age, Oliver joined the Air Force when the Korean War was already underway. Much to the chagrin of his parents, he knew it was the right decision for him. During his time in the service, Oliver would earn the Korean Service Medal, the United Nations Service Medal, the National Defense Service Medal and the Good Conduct Medal. While encouraged to reenlist, he dreamed of returning home. And, he did so in 1956. Just a few short years later, he would meet and marry Hortense Corley. He readily recounted to everyone the details of the moment he first saw her. She remained his best friend and love of his life even after her passing. Professionally, Oliver spent many years in the trucking industry-eventually leading to his certification to instruct students in the operation of tractor-trailers. While he was proud of this accomplishment, the creation of Guschar meant the most to him. Guschar was a privately held corporation created by Oliver wherein he performed tax and security services. The name was inspired by those of his parents and the company remained active until fifteen years ago. Oliver always brought light, joy and laughter into every room he entered. He was well-known for his story telling as each version seemed to grown larger than the last. He had a way of never meeting a stranger and putting people at ease. We will miss his songs and whistling, but the love he placed in our hearts will always remain. He is survived by his children, Kimberly and Nicole (Timothy), and his grandchildren, Jessica and Elizabeth.

Our kind and loving father, Oliver Lee Howard, 88, passed away on February 16, 2022 in Southfield, Michigan. He was the husband of the late Hortense Howard with whom he shared 62 years of marriage. Born in Detroit, Michigan on June 22, 1933,... View Obituary & Service Information

The family of Mr. Oliver Howard created this Life Tributes page to make it easy to share your memories.

Our kind and loving father, Oliver Lee Howard, 88, passed away...

Send flowers to the Howard family.