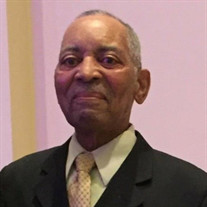 Celebrating the Life and Legacy of: Marvin David Wood Sunrise: December 4, 1945 | Sunset: May 23, 2021 Marvin David Wood was born in Detroit, Michigan, on December 4, 1945, to Tommie E. and Alice H. Wood. He was the sixth of their seven children. Growing up, Marvin had an enormous love for music, cooking, cars and travel. He could often be found listening to jazz, taking cross-country road trips and grilling for his girls or making his famous chili. As a pre-teen growing up on the North End of Detroit, Marvin began his working career as an entrepreneur by establishing his “network of many loyal clients” on his “Paper Route” throughout the neighborhood. Marvin was educated in the Detroit Public School System and was on the Swim Team at Pershing High School where he became a “professional-grade” diver. He obtained his degree in Photography & Photographic Imaging from Wayne County Community College, and also attended Wayne State University. Marvin began his automotive career at Ford Motor Company in 1964 and retired from The General Motors Corporation, after 30 years, in 1995. Marvin held the rank of Specialist First Class while serving in the U.S. Army from 1969-1971. Marvin married the love of his life, his soul mate, Carolyn Marie Couch, and they enjoyed over five decades in Holy Matrimony. Together they raised and nurtured two loving sons, nieces, and nephews. The life they shared was captured by his expertise in photography Under the leadership of his father, Marvin was raised in and spent most of his life at Bethel Church of the Apostolic Faith. He dedicated his life to care for his parents when they became unable to care for themselves, taking them to church and to their ministerial meetings. He was a dedicated son, moving his father into his home to make sure he was well cared for. Serving under the leadership of his current Pastor, District Elder John M. Lucas, Marvin was appointed to the position of Deacon in 2001. Marvin loved performing his responsibilities as Deacon. He also served as Sunday School Teacher, Usher, member of Bethel’s Men’s Department, and member of the Rosetta Black Scholarship Committee. Deacon Marvin was a FAITHFUL prayer warrior, and would frequently visit the sick. Deacon Marvin loved The LORD, his FAMILY, his church, and his church family. He was an avid reader, especially of the Bible and spiritually related books, and was always in pursuit of more knowledge. Marvin was very passionate about music. His first instrumental love of music came in playing the Congas and Bongos. His desire to play the piano allowed him to grow in his musical abilities. Marvin enjoyed fishing & boating, his family trips to Mackinaw, taking walks at the mall, and creating, building, & running his extensive train collection. He was an enthusiastic photographer and would snap a picture or a record a video at every opportunity. Marvin was adventurous and would try anything from snorkeling to parasailing. On Sunday, May 23, 2021, The Lord called His servant home to reign with Him in his heavenly mansion. Marvin was preceded in death by his parents, The Late District Elder, Pastor Tommie E. Wood and The Late First Lady Alice H. Sterrett Wood; brothers, Thomas Wood & Olin (Toby) Wood; sister, Heloise Johnson; & grandsons, Tavish Lewis & Martez Johnson. He leaves to cherish his memory: His loving & devoted wife, Carolyn; sons, Marvin Wood, Jr. (Joyce) and Myron Wood; sister, Brenta Jackson; brothers, Ernest Wood (Mary) and Willard Wood (Patricia); 9 grandchildren, Paul, Tamikia, Tesia, Chanel, Nicole, T’nia, Jasmine, David, & Elijah; 4 great-grandchildren; DaMonney, Jajuan, Aliyah, and Nicole; a special great-grand niece Reagan, (who lovingly referred to him as “Umppie”), and a massive number of nieces, nephews, godchildren, and cousins, all of whom were extremely special and important to him.

The family of Marvin David Wood created this Life Tributes page to make it easy to share your memories.

Celebrating the Life and Legacy of:

Send flowers to the Wood family.