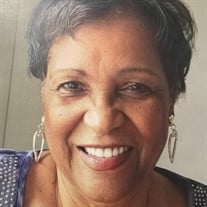 Obituary Mrs. Margaret Ann Wallace was born on August 5th, 1946, to Nellie Hortense Braxton and Frank Perkins, Jr. and was also blessed with stepfather Edward Braxton who was also instrumental in her life. Margaret affectionately referred to as, “Sister” by her mother and brothers was the youngest and grew up with three older brothers who loved and adored her as their baby sister. Margaret accepted Christ at an early age and was baptized at Peace Missionary Baptist Church in Talladega, Alabama. She attended and graduated from Westside Highschool in Talladega, Alabama where she also served as a lead Majorette. At the age of 10, Margaret befriended Horace Leroy Wallace whom she affectionately called “Leroy.” Margaret married Leroy at the of 18, on August 14, 1965. Through this union, they shared two daughters Rachel & Marguerite, aka “Rita.” Margaret, a stay-at-home mother took great joy in caring for her husband and daughters. They say it takes a village to raise a family. Margaret was that village. She helped raise several of her nieces and nephews that enabled her Brother & Sister-in-laws to work and pursue their careers. Margaret loved being surrounded by family and friends. She and her husband, Leroy served as hosts to many holiday festivities and card games where all were welcomed throughout the years. Cooking was her passion, especially soul food, Sunday dinners, Thanksgiving dinners & her peach cobblers was a family favorite. Margaret also had a love for music, especially gospel music. She also loved her Motown music, in particular, Marvin Gaye and Smokie Robinson. Margaret was a loving and devoted wife, mother, and Nana (Grandmother). She loved her nieces and nephews as her own. She also was very loyal, loving and devoted to her girlfriends. Margaret’s love, spirit, humility and sense of humor will live in our hearts forever. Margaret was preceded in death by her father, Frank Perkins, Jr., her mother, Nellie Hortense Braxton, stepfather, Edward Braxton, two brothers, Samuel L. Braxton and Elisha Braxton and one half-sister, Amanda Jones, one and her favorite cousin and best friend Doris Curry. She leaves to cherish in her loving memory: her loving, loyal and devoted husband of fifty-six years, Leroy Wallace; two daughters, Rachel Wallace and Marguerite Goosby (Danny); one bonus son, Victor Chapman, two grandsons, Daniel (aka DJ) and Danzel Chapman; two granddaughters, Vonchelle Tomkins, and Victoria Chapman; one brother, Robert Braxton; two Brother-in-laws, Clifford Wallace (Shelia) and Chris Cole (Lattice), three Sister-in-laws, Mattie Wallace, Wille Bell Braxton, and Doris Hawkes; and an abundance of nieces, nephews, aunts, uncles, cousins, and friends.

The family of Margaret Ann Wallace created this Life Tributes page to make it easy to share your memories.

Send flowers to the Wallace family.