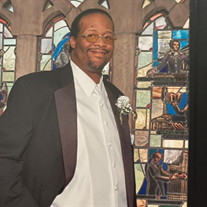 Luther W. Dabbs II was a good man and a loving husband who loved his wife and his family. Luther died on April on 25th, 2020 after a long illness. Luther was born in Highland Park, MI on February 14th 1970 to the late Mr. Luther W. Dabbs Sr. and Dr. Ruth-Ann Huggins. Luther attended Friends in Detroit Michigan. Later Luther graduated from Mt. Clemens High School in 1988. Luther obtained his Bachelors of Arts Degree in Political Science from the University of Detroit Mercy. And also obtained a certificate of completion from Central Michigan University in Urban Planning. Luther had an enthusiastic appetite for politics, sports, cars and video games; especially basketball. Luther began as a precinct delegate in the city of Southfield, MI. Luther was a dedicated member of the Southfield Lathrup Village Democratic Club. He served as parliamentarian and a trustee. He took his duties very seriously. Luther was also a member of the Greater Southfield Farmington Area NAACP. He was active in all aspects of the Democratic process. Including; the Oakland Democratic Party as well as the State of Michigan Democratic Party. Luther was knowledgeable about politics and history. He was a very brilliant man when it came to education. He also encouraged others in the area of education and history. Luther was a basketball enthusiast too. He would often attend his beloved U of D Mercy colligate games. And enjoyed taking family members with him. Luther also enjoyed video games and arcades. He loved going there by himself and taking his cousins and other younger relatives along as well. Luther loved cars. He could give you the specs on a vehicle without any hesitation. Luther loved a good meal as well. There were not too many restaurants that Luther was not known at. In June 2002 while having a bite to eat at Fridays Restaurant he met the love of his life; Angela Rhaney. They started dating and after courting Angela; Luther proposed in February 12, 2005. They were wedded in a beautiful ceremony; September 8, 2007 They enjoyed their life together. They loved spending time together. Luther enhanced her interest in politics and education. They enjoyed concerts and movies together. Luther enjoyed spending time with his extended family; especially the kids. They would play video games go to the park, basketball games and family outings. Even, as Luther’s health began to decline in 2010, they still were doing what they loved. Even, going on multiple road trips to his beloved Mississippi. They were looking forward to relocating to the south for the weather and undertake their new forever home with their fur babies. Even with the lost of his right leg and vision his true love was right by his side. They together were still committed to their community and to each other. Unfortunately, Luther’s End Stage Renal Disease did not let him full-fill his dream with his beloved Angela. Luther also leaves to cherish in his memory his mother in law Mae Rhaney and Michele Christopher. Sister-in-law Edith Clausen (Dale). Sharita Wright of Texas. His loving cousins; Ruby Woods-Robinson and LaTanya Robinson, Early Woods Jr (Chiquetta), Scott Woods (Delesa )Joseph Rainey(Tina), Arnika Rucker-Davis, Stephanie Washington. The entire Woods Family, Donna, Noni, Rae, Scott (De’Lisa) Early(). And his Springer Family in Atlanta, GA and throughout the south. His many nephews and many cousins from Inkster, MI. Mt. Clemens, MI and from Okolona, MS as well as Atlanta, GA and Tuskegee, Al. My beloved Luther (Big Daddy). I miss you more than words can say. I surely thought we had more time. Even, with the many surgeries you had. I just knew you were going to pull through this. GOD, had another plan. I can’t believe that you’re gone. I miss you calling my name to look for the remote, I miss you asking me where’s Daphane. She misses you so much. Even, Spencer knows you’re not here. You definitely enlightened my life. I always said that I was truly blessed to have you in my life. But, I was blessed to grow with you and love you. I took vows for better, for worse, sickness and in health, till death do us part. I tried my best, I did everything that I know I could do. But, it was not enough to keep you with me and the fur babies. I promise to do my best to full-fill your wishes as if you were here. I will grieve for you but will thank GOD that you’re not suffering anymore. You’re with your mom and dad now. Until we’re together again. Love you Always!!

Luther W. Dabbs II was a good man and a loving husband who loved his wife and his family. Luther died on April on 25th, 2020 after a long illness. Luther was born in Highland Park, MI on February 14th 1970 to the late Mr. Luther W. Dabbs Sr.... View Obituary & Service Information

The family of Luther Dabbs created this Life Tributes page to make it easy to share your memories.

Luther W. Dabbs II was a good man and a loving husband who loved...

Send flowers to the Dabbs family.