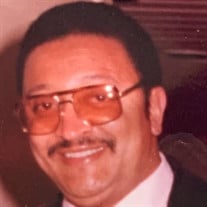 In Remembrance of Our Beloved Larry Johnson of Detroit, MI passed away on June 11, 2021 but his wisdom and kindness will not be forgotten. Although Larry may have gotten sick near the end but in our eyes he had never lost the strength and supreme character that we always knew him for. He was the voice that never failed to give us the best of advice. A man of principal and generosity Larry was firm for what he believed in and it was from him that we learned to stay strong, choose wisely treat kindly and of course, “Buy American”. But Larry was more than just a stoic figure. He was also a great communicator whether it be through song or carefully chosen words he touched hearts and affected positive change of many. There are so many things to remember about him like how he could make a mean sweet potato pie and dressing; loved to throw parties, play cards and travel. Like how he always opened his home making sure to keep an abundant variety of chips, cookies, and cakes on hand to make all feel welcomed. Like how he could turn any occasion into a karaoke event whether it be when friends and family (and the cable guy!) came over, when we were eating dinner or watching a movie…He even traveled with a portable karaoke just in case. Like how he always imported statements that were insightful and that could bring a chuckle to a moment of seriousness like, “I am not always right but I am never wrong”. So while we stand deeply grieved by the loss of one of the pillars in our family we are also thankful for the chance to have had him. He respected his role of being a provider, a protector, and a peacemaker in the family which made him one of the most powerful men I knew. Larry is survived by his wife: Reta; Children: Cookie, April, and Kris; Grandchildren: Andreana, Justin, Tamia, Tyler, and Trevor; Great grandchild: Arielle; Sister: Leila, and brothers: Tom, and Stanley. He is also survived by honorary brothers and sister: Louis, Steve, Al, and Evelyn, a host of cousins, nieces, nephews, and friends. His passing was preceded by his parents: Helen and Joseph; sisters: Josephine, Hattie Mae, and Margaret; and brothers: Ralph and Harvey.

In Remembrance of Our Beloved Larry Johnson of Detroit, MI passed away on June 11, 2021 but his wisdom and kindness will not be forgotten. Although Larry may have gotten sick near the end but in our eyes he had never lost the strength and supreme... View Obituary & Service Information

The family of Larry Johnson created this Life Tributes page to make it easy to share your memories.

In Remembrance of Our Beloved
Larry Johnson of Detroit, MI passed...