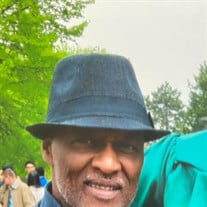 Larry Dwayne Johnson was born August 7, 1952 in Detroit, Michigan to Ophelia Johnson and Tommie Peterson. Larry graduated from Detroit Northern High School and attended Wayne State University, which led to a career as a journeyman electrician at Ford Motor Company and later a high voltage electrician at Rouge Steel. In 1973, he married his high school sweetheart, Maxine Johnson. From this union, their daughter, Candice, was born. He married his soulmate, LaDonna McQueen in 1995. Together, they welcomed a son, Larry, and a daughter, Crystal. Their union was tragically cut short with LaDonna’s passing in 1999. In 2007, he married Pamela Cobb. Larry was also blessed with a son, Justin, from a previous relationship. In his younger years, Larry was very athletic. He ran track for his high school team and continued to run as well as ride his bike on Belle Isle Park recreationally for many years. He was also a very good basketball player. Even in his 50’s, he could dominate the 20-somethings on the court. He enjoyed working, spending time with family and friends, doing home improvement projects, cooking, and keeping up with fashion trends. Everyone who knew Larry knew he could grow a head of healthy and long hair. In his later years, Larry’s mobility became limited, so he developed good friendships with residents in his apartment building. Many of the residents enjoyed spending time with him, admired his sense of humor and how well he dressed, and appreciated his kindness, as he was always willing to give money to or buy food for a friend in need. Affectionately referred to as “PawPaw” by his grandchildren, Larry enjoyed being a grandfather and appreciated visits from his grandchildren very much. Larry leaves to cherish his memory his mother, Ophelia Murray; children, Candice Washington (Terry), Justin Price (Bianca), Larry Johnson, Jr., and Crystal Johnson; his siblings, Wanda Clemons (Curtis), Lillian Baker, Edwin Murray, and Diana Collins (Darrin); his grandchildren, Justin Price, Jr., TaShya Johnson, Paradise Johnson, and Nicholas and Amber Washington; nephews, nieces, great-nephews, a great-niece, cousins, and dear friends. Larry was preceded in death by his wife, LaDonna Johnson, and brothers, William Johnson, Roosevelt Johnson, and Willie Murray.

The family of Larry Dwayne Johnson created this Life Tributes page to make it easy to share your memories.