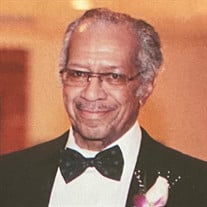 Mr. Kenwood Dossie Jr. made his transition on Saturday July 31, 2021. Please encourage the Dossie family with words of love and encouragement. Kenwood Dossie, Jr. was born in Detroit, Michigan on March 24, 1931 to the late Kenwood Dossie, Sr. and Ophelia Watson Dossie Frazier. He was the third of their five children. He is preceded in death by his parents, sisters, Lorina Dossie, Thelmond M. Johnson, Annie P. Stewart and brother Robert J. Dossia. Kenwood attended Detroit Public Schools and graduated from Northern High School. With his mother’s signature he joined the United States Army at the age of 17 shortly after the official end of World War II. And so began the cherished career of his lifetime. Kenwood was a veteran of the Korean and Vietnam Wars. For his service he earned several medals, badges, and campaign ribbons. He received an honorable discharge after more than 25 years of service, achieving the rank of First Sergeant of his unit. Following his military retirement, Kenwood began his second career in the customs industry. He worked for D.J. Whelan & Co., Inc. in Detroit for 34 years. Kenwood loved his family, traveling and photography. After a brief illness, Kenwood died on Saturday, July 31, 2021 at Sinai Grace Hospital in Detroit. He is survived by his son, Trenell Murry and grandson, Tamari Murry, of Detroit; nieces: Velcia Haughton Walker and husband Solomon of Belmont, North Carolina, Théda Page Brice and husband Julian of Frisco, Texas; nephews: Mario Hoffman and wife Patricia of Matteson, IL and Christopher Dossia of Gadsden, Alabama and a host of great and grand nieces and nephews, and cousins.

The family of Mr. Kenwood Dossie Jr. created this Life Tributes page to make it easy to share your memories.

Mr. Kenwood Dossie Jr. made his transition on Saturday July 31,...

Send flowers to the Dossie family.