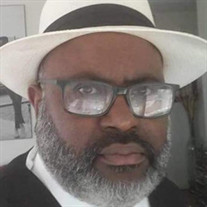 Kenneth Hunter made his transition the afternoon of Saturday April 11 in Detroit, MI. Kenneth Anthony Hunter the first of four children born November 14th, 1955 in Detroit, Michigan to the proud parents of S.M. Hunter Jr. and Leslie M. Hunter. Kenneth who was referred to by all his family and friends as, “Kenny”. Kenny accepted Christ at an early age and was a member of Chapel Hill Baptist Church under the pastorate of Rev. Roy A. Allen Sr. A product of Detroit Public Schools, Kenny attended Angell Elementary, McMichael Jr. High School and Northwestern High School. After graduation, he furthered his education by attending Mississippi Valley State University on a track scholarship and later enlisted in the United States Air Force. After his four-year term in the Armed Forces, Kenny proudly received an Honorable Discharge. Kenny employment consisted of Ford Motor Company in supply chain integration, Electronic Data Systems where he worked as a Telecommunications Technician, and Lakeridge Village Inc. where he provided security and assistance to the community for people who suffered from mental and substance abuse. Everyone that knew Kenny took notice that he was a lover of track and field, music, and golf. A proud member of Northwestern High School Alumni Class of 1973. “Go COLTS”!!! He was a loyal member of Prince Hall Lodge Unity No.28 F&AM. There, is where he began to receive instruction and study the craft for the practice of Masonry. He currently held the position of a Past Master Mason and he was one who has held the office of Worshipful Master in a lodge of Freemasons. Kenny was preceded in death by his father S.M. Hunter Jr. Kenny made his transition on April 11th, 2020. Amongst those that will forever cherish his memory is his mother Leslie M. Hunter. Three sons Jason, Kyle, and Taylor. Three siblings Karen D. Jackson, Larry (Doreen) Hunter, Kelvin (Marilyn) Hunter. Nieces, nephews, family, and friends. He will be laid to rest Friday May 15th at the Great Lakes National Cemetery located in Holly, MichiganPlease encourage the family with an everlasting note of condolence on our Tribute Page.

The family of Kenneth Anthony Hunter created this Life Tributes page to make it easy to share your memories.

Kenneth Hunter made his transition the afternoon of Saturday...

Send flowers to the Hunter family.