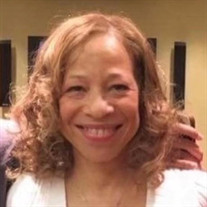 Julie K. Webb Steward made her transition on Friday February 12, 2021. Please encourage the Webb Steward family with words of love and encouragement on our Tribute page. To send flowers or a memorial gift to the family of Julie K. Webb Steward please visit our Sympathy Store. Julie Katrina Webb was born in Detroit, Michigan on July 1, 1963, the only child born to the union of the late Walter Dakota and Mary Catherine Webb. At an early age, Julie studied classical ballet as well as classical piano. She was always considered her piano teacher’s most accomplished student, was electrifying to watch live, and placed in advanced piano competitions many times. The Russian composer, Tchaikovsky, was her favorite to listen to and play to. Attending Detroit Public Schools for all of her education, she excelled academically as well. She was a brilliant mathematician, participated in math clubs and choirs throughout school, and graduated with high honors from Renaissance High School’s first graduating class in 1981. Even before graduating from high school, Julie was accepted to one of the highest-ranking schools for music – Stanford University. She was in high demand, because she was also accepted to her father’s alma mater, the University of Michigan, and she entered Michigan’s School of Engineering in the fall of 1981. Introduced to a passion for football by her father, Julie was a football fanatic, watched football religiously, and became one of the biggest “cheerleaders” for the University of Michigan’s football team – she went to dozens of games, and watched on TV when she couldn’t get there. Absolutely everybody knew where Julie would be during any and every Rose Bowl game. And absolutely no one wanted to get a call from her, immediately after Michigan had lost a game – it was not going to be pleasant. While at Michigan, she also became a Kappa Sweetheart, a “little sister” organization formed to support the Kappa Alpha Psi fraternity. Julie ultimately graduated from the University of Michigan with a Bachelor of Arts in Psychology. And went to work at the Michigan Osteopathic Medical Center for over a decade as a mental health worker. Upon leaving “MOMSIE,” as the Medical Center was called by Detroiters, she also worked as a Data Analyst for DTE and for an attorney. She continued her love of singing by taking her angelic voice into the recording studio with family and friends to record several songs that were given out as gifts. Julie absolutely loved the blues, introduced many of her friends and family to the genre by taking them to local blues joints, and had a keen ear for all good music. Some of her favorite artists were BB King, Etta James, Yolanda Adams, Stephanie Mills, Melba Moore, and Deniece Williams. If you knew Julie, you know that she was also a woman who was passionate about animals, animal rights, and in particular, dogs and wolves. Her childhood dog, Lulu, was the love of her life, and as an adult, she went on to have her dogs, Hannibal, China and Nala. She also put her money where her mouth was, and consistently donated to charitable organizations that teach people about wolves, their relationship to the environment, and the human role in conserving them. She once simply said, she liked the way wolf mothers took care of their cubs. Julie married Maurice Steward, and from this union, two beautiful children were born, Maurice and Jayla. And Julie definitely became a devoted mother who took care of her cubs. They were her priority. She encouraged her children, and never minded playing the role of a stage mom and a soccer mom -- she was incredibly active in her children’s lives. She took Jayla to dance, Delta Gems, cheer squad practice, and track; and took Maurice to soccer, Kappa League, Big Brothers, and Boy Scouts. In fact, Maurice achieved the ranking of Eagle Scout, a standing which only four percent of Scouts reach. She was proud of her children, and of their accomplishments, and as her daughter Jayla said of her, she “would make a way out of no way” for them. Family was so important to Julie. An avid jogger, she used to jog over to her beloved Aunt Tishie and Uncle Roy’s house to check on them. She diligently kept in touch with her cousins, and considered them amongst her closest friends. Even during these times of COVID-19, she still managed to socialize with her family, by participating in monthly “family reunion” Zoom calls, and frequently “watching football games” with her dad on the phone. As an adult, she was baptized at Hope United Methodist Church, and volunteered at its Vacation Bible School every summer. Never let it be said that Julie wasn’t highly opinionated and the epitome of stubborn. She could talk your ear off about any subject – animals, local politics, relationships, or the state of black America and of course, her children. She was sweet, loyal, protective, and selfless, and wanted to see those she loved win. Julie leaves to mourn her passing: her son, Maurice Steward; daughter, Jayla Steward; stepdaughter, Jasmine Steward; brother, Craig Jenkins; aunt, Patricia Ryder Williams (Roy); and cousins: James Spearman (Peggy), Jerry Webb (Lydia), Oliver Crump (Karen), Sheilah Clay (Harold), Walter Webb, Kim Adams (Kevin), Paul White, Craig Spearman (Kim), Malik Marc-Levy Williams, Lauren Ryder Williams (Myron), McKenzie Gadis (Chandler), and Harold Clay, Jr.; and lifetime family friends, Thelma Dave, Juliana Dave Chevannes, and Robert Dave, and a host of other friends and relatives.

The family of Julie Katrina Webb Steward created this Life Tributes page to make it easy to share your memories.

Julie K. Webb Steward made her transition on Friday February...