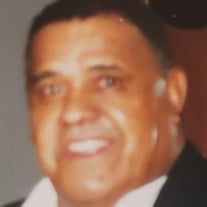 Joseph Issac Anderson was born October 15th, 1929 in Hamtramck, Michigan to the late Charles and Ruth Anderson. Joseph's siblings Edward, Charles, John, Rosita, Carlen and Alfred Dave Anderson, along with many other family and friends too numerous to list by name preceded him in death. Joseph grew up in a loving family and learned the value of hard work at a very early age by delivering newspapers and working at the local dry cleaners in his neighborhood. Joseph was formally educated in the public school system of Hamtramck, Michigan. After graduation, he began his life's journey by immediately enlisting in the United States Army at the young age of seventeen. Serving with Honors in the Korean War, he earned many campaign and unit awards including the Purple Heart and the Action Combat Service Badge which he valued the most. After leaving the Service, Joseph married Beverly Johnson and to this union two daughters were born; Maria Travis and Yvonne Felton. Joseph enjoyed fishing, hunting, cooking and going up North to his "Chateau" in Baldwin, Michigan. He took pride in cooking and found it very therapeutic. This talent enabled him to put a smile on many faces and he found the best recipes and mastered the alcohol to seasoning ratio. Joseph always had a passion for people and he left an impression on everyone he met. He was a great conversationalist and story teller; his ability to recall facts and events was phenomenal. There was no one he met that remained a stranger and he was always there to help if you needed it. Affectionately known as "Joe", "Grandpa Joe", or "Uncle Joe" even more importantly as "Daddy", he had the natural comedic gift of making everyone laugh. Simply out, Joe was hilarious even when he didn't want to be or wasn't trying. He put smiled on thousands of peoples faces over the years while staying balanced enough to hear and understand what was on the other person's mind and provide valuable feedback. Joseph leaves to cherish his king and loving memory, his daughters Maria Travis and Yvonne Felton (Noel), brother Phillip "Mickey" Anderson (Mary), sister-in-law Florine Anderson (Davey), grandson's Kevin, Michael, David Travis (Teniya) and Noel Felton Jr. Nieces and nephews, Ruth Michael, Carol Gagliardi, Rose Walter-Jacks(Warren), Glenda Browning, Rhea Vasconcellos(Mark) and Michele Vasconcellos, Great Nieces and Nephew Tracey Bagwell, Andre Bagwell(Tonya), Nicholas Gagliardi, Samantha Michael, Yvonne, and Norlene Browning and a host of great and great great grandchildren and nieces and nephews, and host of friends and family. e

The family of Joseph Issac Anderson created this Life Tributes page to make it easy to share your memories.

Send flowers to the Anderson family.