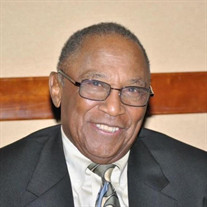 He did it his way Born on March 17, 1940, to Marjorie and John Henry Dean, John Freeman Dean’s childhood was filled with loving memories with his dearly beloved grandmother Lizzie Washington. They attended Mt Zion Missionary Baptist Church where John sang in the children’s choir. Even at a young age, John was a sports enthusiast, playing baseball, basketball and football - and winning at them all. After attending Vine Junior High and Austin High, John enrolled in Knoxville College in Knoxville Tennessee. Life at Knoxville College was good but John’s life would be forever changed when he met a young freshman named Norma in 1959. Norma and John’s romance budded as they were in the gospel choir and traveled together singing about God and falling deeper in love. They participated in civil rights demonstrations and in 1960, John entered into the lifelong brotherhood of Omega Psi Phi Fraternity, Incorporated. On December 21, 1963 John and Norma married and began their journey together. After a brief move to St. Louis and Chicago, the Deans set their roots in Detroit Michigan. Leader and Best. John Dean received his Masters of Education from the University of Michigan. Beyond being an extraordinary teacher teaching at schools such as Butzel and St. Theresa’s, John was a legendary coach known for bringing tough competition to the football field every time. His coaching accolades began at Detroit Northern High school where he was Athletic Director and Head Football Coach for forty years. John coached swimming, baseball, basketball and football at Northern. He lead Northern to win the City championship in 1978 and numerous runner ups subsequently. During the summers, John was a regular summer camp coach at the University of Michigan and Michigan State University Football Camps, often coaching the Michigan High School Football Association East/West All Star Game. John used sports and coaching to change the lives of many people. He was a mentor to hundreds of athletes around the country. John also served as an adjunct professor at Wayne State University. John Dean served as Michigan High School Football Coaches Association President for two terms and Varsity Club president. He was a member of the Sunday Headmen’s Golf Club for over thirty years. Hall of Famer. John was inducted into the Knoxville College Athletic Department Hall of Fame in 1991. He was inducted into the Michigan High School Football Coaches Association Hall of Fame in 1995 and John was inducted in to the Greater Knoxville Sports Hall of Fame in 2009. Family Man. John Dean loved his family. He enjoyed throwing parties and entertaining guests with his wife Norma. He absolutely adored and spoiled his daughter Kelly and loved spoiling and spending time with Erik, especially on the golf course. When John became a grandfather, Papi was created. Papi loved spoiling his grandchildren Elijah and Lauren. He enjoyed taking them on trips and telling them stories about his days in Tennessee. After living a full life, John left this life to join his beloved grandmother and others on December 27, 2021. He leaves to cherish his memory, his wife, Norma, daughter, Kelly Dean sons, Erik Dean ( Charity), and Kenneth Glass. He leaves two grandchildren, Elijah and Lauren, his aunt (Eveline) and many other family and friends. We will miss John but we are grateful that he lived his life and he did it his way. In lieu of Flowers, the family asks for donations to United College Fund in memory of John Dean. https://secure2.convio.net/uncf/site/Donation2;jsessionid=00000000.app20014a?df_id=5320&5320.donation=form1&NONCE_TOKEN=D4A5FE6319011EAA95C072370B484899

He did it his way Born on March 17, 1940, to Marjorie and John Henry Dean, John Freeman Dean&#8217;s childhood was filled with loving memories with his dearly beloved grandmother Lizzie Washington. They attended Mt Zion Missionary Baptist... View Obituary & Service Information

The family of John Freeman Dean created this Life Tributes page to make it easy to share your memories.

He did it his way

Send flowers to the Dean family.