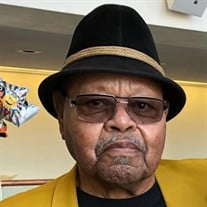 ORDER OF SERVICE Musical Selection Processional Scripture Psalm 145:13-18 Philippians 4:4-7 Prayer Acknowledgements of Cards and Condolences Obituary Remarks Musical Selection Eulogy…………… Dr. John K. Revis Recessional Musical Postlude ---JOE’S STORY--- JOE CEFIS CRAWFORD, JR. was born on April 13, 1937, in Memphis, Tennessee to the late Sanie Thornton Taplin and Joe C. Crawford, Sr. His grandparents helped to raise him and were a large influence in his life. He accepted Jesus at a young age and the principals of Christ were prevalent throughout his home growing up. Joe attended Melrose High School in Memphis, Tennessee. After moving to Detroit, he graduated from Northwestern High School. He was very independent and excelled in school. Joe enjoyed learning and was always seeking information about anything of interest to him. This was evident in his work and hobbies, as he was meticulous and proficient. Joe’s first marriage yielded one child, Kenya Brown. He was excited to become a father and he doted over her. He later met Glauiel Smith and was smitten with her at first site. They married in 1998 and raised one son, Cameron Z. Smith. “Joe-Joe” or Dad, as he was affectionately called by then toddler Cameron, was a proud and present father. He was Cameron’s biggest Cheerleader, literally, at football games, wrestling matches, swim lessons and the like. He always took advantage of the opportunity to share how proud he was of Cameron’s achievements. He loved to see young people excel academically. He was proud when Alicia graduated, and each time his nieces and nephews did something noteworthy. Joe enjoyed time with his family shopping, traveling, going out to eat and even riding roller coasters. Joe enjoyed watching all sports, with football being his favorite. He reveled in quiet moments watching football in “his chair”. He also enjoyed watching it with his son, father-in-law, brothers-in-law or anyone who also loved the game… A-N-D who did not talk too much while watching it. He loved a good golf game, especially when it did not linger, due to small talk. During his GM days, while at work, he and the guys would pass the time by playing cards during breaks or when the line was down. Joe had a passion for cooking, was good with the spices and was talented in both the kitchen and outside on the grill. He never bragged about his cooking, instead he let the taste speak for itself. He was always generous with his cooking techniques and shared them with lots of pride. When he cooked, he made plenty, just in case family and friends stopped by for fellowship. Next to sports and cooking, was his love and appreciation for good music. His taste for music was eclectic, as he enjoyed the smooth sounds of Jazz, the beats of R&B, the Rap styles of Drake, Future and Da Baby, alike. He was known to be “oh so smooth” on the dance floor, appearing to float across the floor while Ballroom Dancing. Joe was a member of Motown’s “Soul Supergroup”, the Miracles at the beginning of their singing career. He left the group for what he thought would be a lucrative and more stable career. As a child, Joe enjoyed playing the saxophone. Joe’s career path started at Lasky Furniture Store in Detroit, where he drove trucks and was bonded to handle the finances. An opportunity to work at General Motors (GM) was the beginning of a long career. Not only did he build cars, but he also built many lifelong friendships. There he served for over 40 years, retiring in 2006. Joe liked and appreciated fine things and enjoyed life to the fullest. He always drove a nice car and was always dressed clean, even when casual. On Wednesday, September 15, 2021, Joe peacefully made his transition from labor to reward. He leaves to cherish his precious memories his devoted wife of 25 years, Glauiel Smith-Crawford; his son Cameron Z. Smith, daughter Kenya Brown and granddaughter, Alicia Brown; Sisters-in-law: Lynette Knight and Sonji Lynn Revis (John); two brothers-in-law: Reginald Smith and Carl Jay Smith (Robbi); one step-brother, Henry Taplin (Lethel “Let”), cousins, nephews, nieces and his Friends from GM. While we will miss Joe terribly, we trust God’s perfect timing and await the day we see him again. Acknowledgement of Appreciation The family of Joe C. Crawford, Jr. wishes to acknowledge with deep appreciation, the many comforting messages, floral tributes, prayers and many other expressions of kindness. A more personal acknowledgement will be made at a later date I am happy to create this final Tribute as a celebration of your life. Joe, you are gone from this life, but will never be forgotten. Rest in Power my Brother! ~Sonji Lynn Honorary Pallbearers Cameron Z. Smith Carl Jay Smith Henry Taplin Dr. John K. Revis Reginald G. Smith Flower Bearers Friends of the Family Arrangements Entrusted To Kemp Funeral Home and Cremation Services 24585 Evergreen Road • Southfield, Michigan 48075 • 248-702-5367 https://www.kempfuneralhome.com Please encourage the Crawford family with words of love and encouragement on our Tribute page. To send flowers or a memorial gift to the family of Joe Crawford please visit our Sympathy Store.

The family of Joe Crawford created this Life Tributes page to make it easy to share your memories.

Send flowers to the Crawford family.