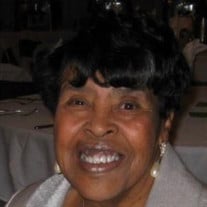 Mrs. Jones passed in her daughter's home on April 15, 2020. Please encourage the family with an everlasting note of condolence on our Tribute page. Joan L. Jones was born on July 22, 1935 in Detroit, MI to Lapeer and Willie Lee North. She enjoyed her childhood with her sisters Joyce and Sybil and brother Charles, all who preceded her in death. In 1955 she married William Paul Jones, Jr. They enjoyed 44 years of marriage together until William's death in 2000. To this union three children were born Michael, Paula, and Kenneth. Joan gave her life to Christ as a child and joined her family at Shiloh Missionary Baptist Church. She spent her life in Detroit graduating from the renowned Cass Technical High School in 1953. She was a music major and played the organ, piano, viola and harp. She played the organ at several churches as well as being instrumental in establishing the Henry Ford Hospital choir during her employment. She retired after 25 years because of health challenges. In the 1970s she was asked to come back home to direct the Seraphs Choir as the historic Greater Shiloh Missionary Baptist Church under the pastorate of Rev. William Crews which she did for 17 years. She was a member for over 60 years and continued directing until her health prevented her from serving. Joan travelled with the choir to several states singing at National Baptist Conventions. She was known for her dynamic directing style and her ability to take the convention and especially the church to higher heights. Over the years God has brought her through many health trials and she remained faithful until the very end. She leaves to celebrate her life and legacy her sister-in-laws Helen North and Arene Jones; sons Michael Jones (JoAnn) and Kenneth Jones (Jane); daughter and caregiver Paula Hightower; grandchildren Michael, Joe II (Jasmine), William (Amber), Keymari, Faith, Cyrus, and Elijah. Her great-grandchildren Michael, Isaiah and Kennedy Hightower; Nephews Keith, Charles Jr. Allen, Charles and Edward. Her nieces Jennifer, Maredith (caregiver) and Monica; great nieces, great nephews and a host of relatives and friends. Thank you to Mary Harris for your friendship and love throughout the years. A special acknowledgement to Henry Ford Hospice Oakland (nurses Carrie and Sharon)

Mrs. Jones passed in her daughter's home on April 15, 2020. Please encourage the family with an everlasting note of condolence on our Tribute page. Joan L. Jones was born on July 22, 1935 in Detroit, MI to Lapeer and Willie Lee North. She... View Obituary & Service Information

The family of Joan Lafrieda Jones created this Life Tributes page to make it easy to share your memories.

Send flowers to the Jones family.