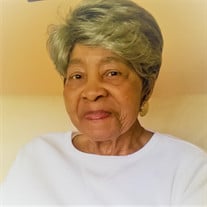 Jessie Mae Pugh got her wings and went to walk with the angels on Friday, March 5, 2021 at 9 o’clock a.m. at the age of 96. She passed away peacefully in her sleep. It would be wrong to say that Jessie lost her battle with dementia because she never stopped fighting. No matter what she was dealing with, she was always the epitome of style, class, and grace. Through her, we know what resilience and perseverance truly look like. Jessie was born in Birmingham, Alabama on September 17, 1924 to the union of Mr. and Mrs. Albert Sidney (Latharee Clarke) Johnson. She was a product of the Birmingham Public School System and was the oldest of five girls. She was preceded in death by her parents and two sisters, Patricia Thomas and Girlene Harris. She married Ben Pugh, Sr. in 1937 and was the mother of eight children. The family moved to Detroit in the early 1950’s, where Jessie provided support and love for her family. Jessie was an excellent homemaker and cook. She periodically worked as a domestic and dietary aide to help care for her family. She and her husband, Ben, worked tirelessly to provide for their children. Jessie confessed Christ and was baptized at Beulah First Missionary Baptist Church in Detroit. She served on the nurses’ board and in the choir. She later became a member of Second Ebenezer Church. Jessie was always very stylish and while attending church services, she became known for her church hats. She was preceded in death by her husband of 64 years, Ben Pugh, Sr. (2000), and four of her eight children: William Howard Pugh (1998), Ben Pugh, Jr. (2005), Bessie Mae Pugh (2007), and Jettie Lou Williams (2019). She leaves to cherish her memory four daughters: Bettie Lou Sykes of Detroit, MI, Carolyn McNeal of Livonia, MI, Ola Mae Pugh of Bethany, MO and Jacqueline Pugh Boatman of Oak Park, MI; two sisters, Rosebud Murdock of New York, NY and Barbara Gray of Bronx, NY; 14 grandchildren, numerous great-grandchildren and many great, great-grandchildren and along with a host of nieces and nephews. Jessie was under the care of the Beaumont Hospice for the past 5 years. The family would like to take this opportunity to thank the Beaumont Hospice Team for their love, support, and outstanding care (nurses: Anjee, Diane; nurse practitioner Charlene; social workers, Shirley and Rebecca; massage therapist, Michael; and Chaplains Harold Owen and Steve McDaniel). The family would like to extend their deepest and sincerest gratitude to home healthcare aide, Lobe Diop. Mrs. Diop was very committed to Mrs. Pugh and provided extraordinary and exceptional daily care to Jessie for four years. As a matter of fact, Jessie would not answer any questions without first looking to Mrs. Diop for guidance. In addition to Mrs. Diop, the family would like to extend special thanks to healthcare aides, Cheyenne Dismukes, Frances Battle and Mona Lisa. Warmest Regards, Jacqueline Boatman

Jessie Mae Pugh got her wings and went to walk with the angels on Friday, March 5, 2021 at 9 o&#8217;clock a.m. at the age of 96. She passed away peacefully in her sleep. It would be wrong to say that Jessie lost her battle with dementia... View Obituary & Service Information

The family of Jessie Mae Pugh created this Life Tributes page to make it easy to share your memories.

Jessie Mae Pugh got her wings and went to walk with the angels...

Send flowers to the Pugh family.