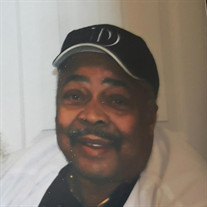 James Nelson Porter was born May 6, 1941 to Louise and Snow Porter in Chattanooga, TN. After moving to Chicago and California as a youth, he eventually settled in Inkster, MI with his mother at age 11. In Inkster, his mother remarried to Emanuel Sistrunk, who became a father to James in his life. James graduated from Roosevelt High School before entering the army. Having graduated from high school at 17, James advanced his age by one year to be eligible for enlistment. After being honorably discharged from military service, he went on to work at GM Hydromatics for 43 years. He retired in 2006 as a millwright. He married Ruth Caroline White in 1967 and to this union had three beautiful sons, Tyrone, Antoine and Allen. James was a family man. He was a loving father and devoted husband. Early in their marriage, Ruth’s niece, Evelyn “Jody” Cloud moved from Chattanooga to live with them and became like a sister to James. He was instrumental in her life as well as her son, the future Dr. Lenton “Joby” Morrow. James was also the ultimate renaissance man. He loved the fine arts. He was an artist. He loved to draw, paint and was an avid photographer. He took classes for photography at Washtenaw Community College and went on to take art classes until shortly before his passing. James also loved flowers and looked forward to every spring when he could visit the greenhouse and select colorful annuals to plant. He was a sports enthusiast. In his younger years, he tried out for the Detroit TIgers and maintained this passion for baseball. He also enjoyed playing golf; and he loved watching westerns. You could walk into his house anytime of day and see a western being played. If not, he was definitely watching a sports event. James was a conversationalist. He could talk the talk on a variety of subjects, always offering humorous or thought-provoking insight. To know James was to love him; he enjoyed talking to people and spending time with family. He loved playing Dominos and listening to the blues. He also liked to go on outings. He enjoyed going to the movies and the casino. He also loved traveling. James would travel to Chattanooga and Dayton to visit cousins, North Carolina to visit friends and most recently to Las Vegas for an epic guys trip to celebrate his grandson’s 21st birthday! On May 12, 2020, God called James home to rest. He leaves to cherish his memory his sons Tyrone (Monica) Porter, Antoine (Johnita) Porter, and Allen (Michelle) Porter; grandchildren Mylen Porter, Tevis Robinson, Tyrell Porter, Antoine “AJ” Porter, Sofia Robinson, Alexis Porter, and Ariana Porter, Clifton Murphy, Cartrell Best, and Cardell Best, great-grandchildren; Shaylen Noelle and Maxton Mylen Porter; sister; Lindafaye Wilson-Allen of Hayward, California, niece; Evelyn Jody Heard, and a host of nieces, nephews, cousins and friends. He was preceded in death by his adoring wife Ruth in 2014; parents, Snow Porter, Louise Sistrunk, and Emanuel Sistrunk; daughter, Carmen Best, and siblings Allen Porter, Lovy Porter-Moore, and Sid Porter. This giant of a man, his presence and spirit will be truly and forever missed.

James Nelson Porter was born May 6, 1941 to Louise and Snow Porter in Chattanooga, TN. After moving to Chicago and California as a youth, he eventually settled in Inkster, MI with his mother at age 11. In Inkster, his mother remarried to Emanuel... View Obituary & Service Information

The family of James Nelson Porter created this Life Tributes page to make it easy to share your memories.

Send flowers to the Porter family.