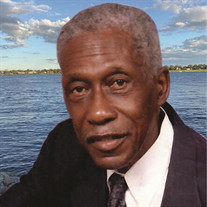 James Edward Black Jr. was born March 2, 1935 to the late James Edward Black Sr. and Eva Mae Collins in Lockhart, Alabama. He was the oldest of one sister, Dorothy Black. James moved from Lockhart, Alabama to Detroit in 1941. In his early years, he worked as a paperboy and at the general store. He attended the Detroit public school system-- Barstow Elementary, Duffield Jr. High and graduated from Miller High School in June 1953. James married Charlotte L. Pearson in 1963 and out of their union were born three daughters: Alicia, Julia and Janeice. He served in the United States Army from 1957-59, then worked for the U.S. Postal Service and City of Detroit with a long-term career in corporate security. He retired from the City of Detroit in 1995 after twenty-five years of service. James accepted Christ as a young boy. He was a member of Old Mount Zion Baptist Church in the Black Bottom section of Detroit. Known as “Papa James”, he had a generous heart and loved to gift his family and friends. James was an avid newspaper reader and loved comic books. He was an active man and huge fan of baseball, basketball, boxing and motown music. In his spare time, James played the guitar. He had a strong passion for drawing illustrations of people throughout his life. “Papa James” was known for driving a fancy, new car. James departed his earthly life on September 14, 2020. He leaves to cherish his memories: his daughters Alicia, Julia and Janeice(Reginald) and stepson Keith; his sister, Dorothy Black; grandchildren Jasmere(Corey), Bryan, Brittany(Jermaine), Brianna, Brandon, Jada and Keaira; great-great grandchildren Jaden, Bailey, Aubrey, Jermaine Jr. and Ava; two nephews Terry and Tony; special friends Dennis and Dawn; and a host of family and friends who loved him.

The family of James Edward Black Jr. created this Life Tributes page to make it easy to share your memories.

Send flowers to the Black family.