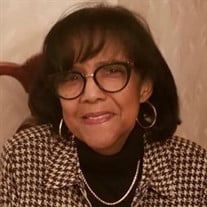 On October 8th, 1943, Iris Doretha McDaniel, was the 10th child born to the union of Jacob and Lelia McDaniel in Danville, Virginia. On that day, God created one of his most beautiful souls. As a young child, Iris was reared in a nurturing household that demonstrated unwavering faith in God, prioritized family values, and stressed the importance of education. As she would say, her parents "didn't have much but we had all that we needed." She often fondly reflected on the life lessons she learned from her parents. She enjoyed belonging to a large, loving family and admired the academic and professional accomplishments of her siblings. Iris also cherished her experience growing up in Danville, a close knit community that exemplified the African proverb "it takes a village to raise a child." Iris received her formal education in the Danville Public School system. Each day, like all of her siblings and the African-American children of her community, she was forced to walk by a whites-only school in route to the segregated school she attended. She, like so many others, persevered and relished her opportunity to be educated. She often joked about having to live up to the high academic performance of her older siblings. In truth, she was an exceptional student and even became the valedictorian of her junior high school. She attended John M. Langston Senior High School. It was there that she realized she wanted to follow in her siblings footsteps and pursue a college education. Iris then enrolled in Bennett College for Women, an historically black college to which she was a proud alum. Her experience at Bennett was invaluable and stirred in her the courage to express her socio-political views. During her time at Bennett, she engaged in social activism including marches, protests, and lunch counter sit-ins. After graduating from Bennett and armed with a sociology degree, Iris decided to relocate to Michigan to live with her brother Avon and his family. She decided that teaching would be her calling so she earned her teaching certificate at Wayne State University. Shortly after relocating to Michigan, Iris met a gentleman named Cecil Rice on the campus of Eastern Michigan University. Cecil knew, after meeting her for the first time, that he would marry her. They wed in 1969 and after 51 years of marriage, he still vividly recalls the day they met as being one of the best days of his life. She was a loving wife, extraordinary mother and fantastic homemaker. She was remarkably hospitable and felt it her duty to make anyone who visited feel right at home. Iris led a fulfilling life. She was a Detroit Public School teacher for 25 years before retiring with distinction. She was a socialite and enjoyed the company of family and friends. She also remained active in the church having been a deacon and elder for many years. She was a proud member of the Red Hat Society and was President of the 50-Up club. She was also a proud member of the Detroit Bennett Alumni Association. She stayed busy until health challenges slowed her down but she always found the strength to engage with her grandchildren whom she dearly loved. Iris made her transition at 4:00 pm on Monday, October 12, 2020. Although she is no longer with us in body, fond memories and the positive impact she had on the people she knew and loved will live forever. To have known her was a blessing. She will be remembered for many things including her generosity. She appreciated the comfortable life she lived and believed that helping others was "good for the soul." Iris was preceded in death by her father Jacob McDaniel Sr; her mother Lelia McDaniel; brothers James McDaniel, Jesse McDaniel, and Jacob McDaniel; and sisters Elizabeth Thompson, Lois McDaniel, and Mary McDaniel. She is survived by her devoted husband, Cecil Rice; one son, Eric Rice; two daughters, Tori Ballard and Kelly Fields; five grandchildren, Andre Ballard, Aaron Rice, Brendon Rice, Chase Fields and Blake Fields; one brother, Avon McDaniel Sr; two sisters Virginia Thomas and Ann McDaniel; and a host of nieces and nephews that will fondly remember their beloved Aunt Iris. A memorial service will be held on Saturday, October 24th at 11:00AM at Westminster Church of Detroit, 17567 Hubble Ave Detroit, MI 48235. Accommodations including limited sanctuary seating, a radio broadcast (AM 1630) allowing guests to listen safely from the church parking lot and online streaming at wcodetroit.org Facebook page will be offered to ensure social distancing and the safety of attendees.

On October 8th, 1943, Iris Doretha McDaniel, was the 10th child born to the union of Jacob and Lelia McDaniel in Danville, Virginia. On that day, God created one of his most beautiful souls. As a young child, Iris was reared in a nurturing... View Obituary & Service Information

The family of Iris D. Rice created this Life Tributes page to make it easy to share your memories.

Send flowers to the Rice family.