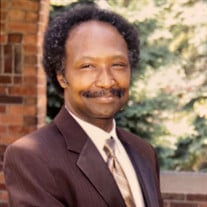 “ I tell you the truth , whoever hears my word and believes him who sent me has eternal life and will not be condemned; he has crossed over from death to life.” - John 5:24 Houston Patrick Perkins was a loving son, father, grandfather and brother. He left this world suddenly on July 9, 2021 at the age of 67. He was born to Otis Perkins Sr. and Clara (Scott) Perkins on September 12, 1953 in Saginaw, Michigan. Houston graduated from Buena Vista High School. Shortly after graduating from high school he went on to enlist in the United States Marine Corps in 1973. After serving his country, Houston would then go on to marry Charlotte (Pinson) Thompson, and from that union they had five children: James, Houston Jr., Virginia, Crystal and Daniel. Houston worked at General Motors for fourteen years and later worked at Saginaw Machine Shop for another eleven years before relocating to Detroit, Michigan. After relocating to Detroit, Houston landed a job at Pico Automotive Industries as a Production Painter. It didn’t take long for upper management to notice Houston’s exceptional work ethic. Within two months he would later be promoted to Paint Production Manager. Houston served this company for eleven years before retiring in this role. His work colleagues all regarded him as the hardest working man alive. He loved Detroit, Michigan and would often visit the downtown area to look at numerous architectural structures he had painted over the years. Houston will always be remembered as the hardest working man amongst his family and work colleagues. Houston was a devoted father and grandfather. He will be truly missed and never forgotten. He was a man of great faith, and he depended on that same love and faith to raise three children. Houston also played an enormous role in the upbringing of his first grandson. His daughters will always be grateful for the love and dedication he gave. Houston enjoyed visiting downtown, and taking long walks along the river walk with his daughters and grandchildren. He was a family man who enjoyed spending all his time with his girls and grandchildren. He taught his daughters early on and throughout their adulthood about Jehovah God. It was an expectation that all his children and grandchildren would have knowledge and a true love for Jehovah God.

&#8220; I tell you the truth , whoever hears my word and believes him who sent me has eternal life and will not be condemned; he has crossed over from death to life.&#8221; - John 5:24 Houston Patrick Perkins was a loving son, father, grandfather... View Obituary & Service Information

The family of Houston Patrick Perkins created this Life Tributes page to make it easy to share your memories.

“ I tell you the truth , whoever hears my word and believes him...

Send flowers to the Perkins family.