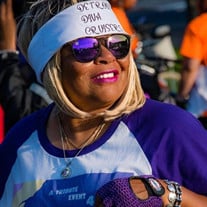 Gloria Mitchell made her transition on February 26, 2022. Please encourage the Mitchell family with words of love and encouragement on our Tribute page. To send flowers or a memorial gift to the family of Gloria Mitchell please visit our Sympathy... View Obituary & Service Information

The family of Gloria Durfield Mitchell created this Life Tributes page to make it easy to share your memories.

Gloria Mitchell made her transition on February 26, 2022. Please...

Send flowers to the Mitchell family.