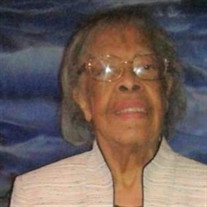 Gloria Patricia Edmonds was the 4th child born to Robert and Glenna Edmonds, who both proceeded her in death. Gloria was born in Detroit, Michigan and raised in Royal Oak Twp. At an early age Gloria accepted Christ, she was a member of Berea-St. Paul and later joined St. Timothy United Methodist Church. Gloria attended the Ferndale School System and continued her formal education at Lane College in Jackson TN with a Bachelors of Arts in Education. Gloria later obtained her Master’s Degree in Education with a specialty in Reading from Eastern University in Ypsilanti MI. Her 1st job was International Teacher in France, Germany and Japan, after returning to the States she taught in the Highland Park School System until she retired. In 2019, Gloria celebrated her 70th year as an Alumni from Lane College. Gloria has done extensive traveling abroad and in the United States collecting many unique artifacts. She was involved in numerous organizations such as a Lifetime member of the NAACP. She obtained the status of a Pearl member of the AKA Sorority – member of the Alpha Rho Omega Chapter of Detroit. She was also a member of the United Methodist Women and Lane College Alumni of Detroit Chapter, just to name a few. Gloria was active and competitive. She loved skiing, bowling and golfing. Gloria was very family orientated and influential in the lives of her nieces and nephews as well as her great nieces and nephews. She was our honorary mother and grandmother. She loved spending time with the family especially birthdays and holidays. She continued traditions lasting 6 generations, her favorite phrase was “people can’t believe we get together so much and they would say don’t you get tired of your family “NAW” what’s wrong with them; they can’t stand their families.” In addition to family gatherings, Gloria loved her sweets especially chocolate, she would say “the best part of dinner is the desserts.” She was proceeded in death by Navajo, Evangeline (Ezekiel), Glennzella (Thomas), Aletha Edmonds (sister-in-law) and great niece Deresa Stanley. She leaves to mourn her brother, Robert of Virginia, 4 nieces, Vanessa, Keila, Candace, and Dawnzella, 2 nephews, George III (Linda), Robert Jr., 11 great nieces and nephews, 11 great- great nieces and nephews, and 1 great-great-great niece and a host of cousins and other relatives. I am the RESURRECTION I am the LIFE Whoever believes in me (though he die) Yet shall he LIVE Please encourage the Edmonds family with an everlasting note of condolence on our Tribute page.

Gloria Patricia Edmonds was the 4th child born to Robert and Glenna Edmonds, who both proceeded her in death. Gloria was born in Detroit, Michigan and raised in Royal Oak Twp. At an early age Gloria accepted Christ, she was a member of Berea-St.... View Obituary & Service Information

The family of Gloria Edmonds created this Life Tributes page to make it easy to share your memories.

Gloria Patricia Edmonds was the 4th child born to Robert and...

Send flowers to the Edmonds family.