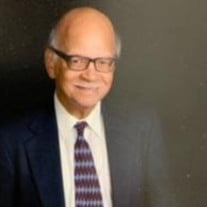 Mr. Gerald E. Johnson made his transition on Thursday May 6, 2021. Let us please encourage the Johnson family with loving words of comfort and condolence on our Tribute page. In lieu of flowers, a donation can be made to one of the following: Sportsman Rod and Gun Club AACHM Historical Museum of Washtenaw County WSC Academy Community Church of God of Ypsilanti Gerald Essex Johnson, Sr. was born on October 3, 1941 to the late Ivanona Kirby and Frank Essic Johnson in Highland Park, MI. He was the middle child of his two sisters; Marion Jewel and Nina Rose. After Papa Frank passed away, they moved on Frederick street in Detroit. As a young boy, Gerald or Jerry Boy as he was affectionately known, was fascinated with the horse-drawn buggy that rode through his alley weekly, where the “junk man” would pick up his finds. He would often tell his Mom and sisters that he wanted to be a junk man and farmer when he grew up. He was educated in the Detroit Public school system and graduated from Central High School. He believed in education and decided to be a lifelong learner. He started his post high school studies at Detroit Institute of Technology (DIT). While there, he met and married Shirley Ann Joseph and from this union came Cynthia Elaine, Gerald, Jr. and Natalie Ann. He was a faithful member of Berean Chapel in Royal Oak Township, which later relocated in Detroit, and served on many committees while there. He continued his education at Macomb Community College, Wayne State University, and completed his Bachelor’s degree at Madonna University in Occupational Safety, Health & Fire Science. He worked on his Master’s degree in management from Indiana State University. Gerald’s career path began at the United States Postal service and continued at Vernor's Ginger Ale, CAN Insurance, State of Michigan Department of Labor, Energy Conversion Devices as Safety Director, and retired from the City of Detroit’s Safety and OSHA department. After his retirement, he co-founded Made In Detroit as a property development company. He became a professor and taught at DIT, WCCC, UofM Dearborn, and was a guest lecturer all over the state. He was a true educator in every sense of the word! His passion was philanthropy and studying Religion and African History. He NEVER missed an opportunity to enlighten others. He was well-known on Shields St. as the “neighborhood father”. All the kids knew if they showed up to the house at 9:00 AM on a Saturday, they got to eat breakfast (famous rainbow pancakes) and participate in whatever outdoor activities were planned for the day. He considered the neighborhood children his own! He molded the lives of those young men by introducing them to scouting. On December 29, 1984, he married his love, Lois Evelyn Ballard, and gained additional daughters Gina Rochelle and Traci Denise. They lived in Rosedale Park, and decided country living was for them and moved to their dream location in Willis, MI where he could be a farmer (and junk man). He enjoyed raising bees and chickens. He sold his raw honey and organic eggs to local health food stores, friends and family and fellow church members of Community Church of God, where they’ve been members since 2002. Gerald loved the outdoors and made it a point to expose his children to horseback riding, hunting, fishing, camping, hiking, canoeing, toboggining, ice skating, etc. If it was outdoors, they did it! He was extremely active in a variety of organizations; including past President of Michigan Black Horsemen’s Association, past Vice President of American Coalition of Black Farmers, Vice Chairman of Farm Service Agency USDA Washtenaw County, Chairman of African American Cultural & Historical Museum of Washtenaw County, and Boy Scouts of America. In recent years, he wanted to get back into scouting, so he started a troop at Community Church of God. Gerald lived a full and rewarding life. He received his wings on Thursday, May 6, 2021 at 6:00 AM.

Mr. Gerald E. Johnson made his transition on Thursday May 6, 2021. Let us please encourage the Johnson family with loving words of comfort and condolence on our Tribute page. In lieu of flowers, a donation can be made to one of the following: Sportsman... View Obituary & Service Information

The family of Gerald E. Johnson created this Life Tributes page to make it easy to share your memories.

Mr. Gerald E. Johnson made his transition on Thursday May 6,...