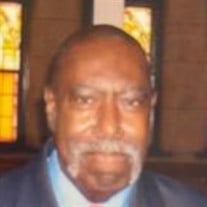 THE OBITUARY FRANK’S JOURNEY Frank’s journey began on June 26, 1941, in Jones County, Georgia. He was the firstborn child of Frank Patterson, Sr., and Evelyn Holcomb Patterson. Both parents preceded him in death. In 1948, the Patterson family relocated to Detroit, Michigan. Frank was educated in the Detroit Public Schools. He served his country as a Military Policeman in Korea during the Viet Nam War. Frank worked for the Chrysler Corporation for 25 years; many of those years alongside his dad. Frank accepted Christ at an early age and has been a member of Greater Quinn A.M.E. for more than thirty-five years. He was a long-time member of the Usher Ministry, a member of the Men of Destiny, a Steward Emeritus, an associate member of the Effie Baber Women’s Missionary Society, a member of the “Drama Connection” drama ministry, and a member of the Men’s choir. His rendition of “Cooling Water” was loved by all. Affectionately known as “Reverend Righteous,” Frank was a prayer warrior who always led the congregation to the throne of grace in his own unique style. Frank has now taken the final step in his journey. He leaves behind to cherish his memory his beloved sister, Barbara Walker, his brother Stephen Simmons (Polly), two nieces, two nephews, a special cousin, Eddie Finney, many grand nieces and nephews, a large extended family, many loving church family members, Senior Bowling league members, and other friends. Frank has finished his course, he has kept the faith, and he has earned his crown. Rest well good and faithful servant.

The family of Frank Patterson Jr., created this Life Tributes page to make it easy to share your memories.

Send flowers to the Patterson family.