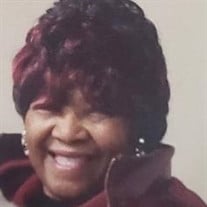 An Incredible Journey Frances Witt, affectionally known to many as “Toni,” was born in Atlanta, GA, to Emmitt and Annie Sue Lamar, April 21, 1939. During her teen years, she moved to Detroit with her mother and stepfather, George Sanders. Frances graduated from Detroit Central High, in 1957. Frances accepted Christ at an early age. FUN FACT: Toni is not Frances’ middle name. She did not like her given name, so she created a nickname she preferred to be called; it caught on and lasted with her friends and associates throughout her life. Frances met Miller Settles and were joined in holy matrimony in Detroit, Michigan in 1960. Frances became a member of Detroit’s Messiah Missionary Baptist Church with Miller, where she was a devoted member for greater than 40 Years. In 1962, the Settles’ Union, welcomed a son Darby. Frances married again in 1975 to John Witt (James). They adopted a young son, John Jermaine in 1984 and remained married until his untimely death in 1989. Frances began employment at Henry Ford Hospital in the late 70’s, as a Data Processing Specialist. She worked at Henry Ford Hospital for 25 years before deciding to take an early retirement to pursue other interests. She attended college briefly but decided instead to invest in rental property. She eventually purchased a 12-unit apartment building in Detroit. Toni was an outstanding landlord who won the affection of anyone who became a tenant at the building she managed. She treated all tenants as though they were her own children, and they responded with the same love and admiration for her. Toni spent several years as the Business Manager for The Israelites. The Israelites were a popular acapella gospel sextet, formed from members of the Messiah Baptist Church Male Chorus. They performed across the Midwest from the late 70’s through the early 90’s. Toni served faithfully as a Nurse for decades. She began her 30+ years as President of the Nurses under the Pastoral leadership of Rev. T. C. Simmons of Messiah Baptist Church, and continuing to serve as President under Pastor Orville K. Littlejohn in later years. She was an active and dedicated member of the Baptist Missionary & Education Convention of Nurses (BM&E) and the Michigan District of Nurses (MI District). She has also had the distinction of being honored by the BM&E, the MI District and Messiah Nurses for dedication and outstanding service. Even after stepping down as President, Toni continued to serve with Messiah’s Nurses, in any capacity needed. Shortly after a brief stay in the hospital, Frances peacefully went home with her Lord on Friday, February 5, 2021. She was a loving caring person who spent her life giving and helping others. She leaves fond memories to cherish with her two sons, Dr. Darby Settles (Cassandra) of Brownstown, Michigan and John Jermaine Witt of Detroit, Michigan, 2 grandchildren Kayla of Woodhaven, Michigan and Mikell of Detroit Michigan, 1 st cousin Shelia Beadles of Atlanta, Georgia, Cassandra’s mother, Elizabeth Knox, Sister-in-law, Marian Wright of Detroit, Michigan, and countless other family and friends whom she loved dearly. Frances’ acts of kindness, generosity and love touched many lives and will be greatly missed.

An Incredible Journey Frances Witt, affectionally known to many as &#8220;Toni,&#8221; was born in Atlanta, GA, to Emmitt and Annie Sue Lamar, April 21, 1939. During her teen years, she moved to Detroit with her mother and stepfather, George... View Obituary & Service Information

The family of Frances Witt created this Life Tributes page to make it easy to share your memories.

An Incredible Journey
Frances Witt, affectionally known to many...

Send flowers to the Witt family.