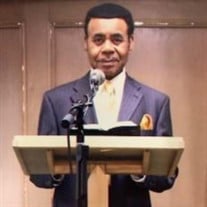 CELEBRATING THE LIFE OF EDDIE L. JONES, SR. EDDIE LAWRENCE JONES, SR. was one of three children born to Downs & Sarah Jones on July 13, 1931, in South Carolina. Eddie was raised by both parents, which provided him with a firm foundation of... View Obituary & Service Information

The family of Eddie L. Jones created this Life Tributes page to make it easy to share your memories.

Send flowers to the Jones family.