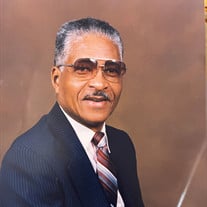 Dones Holmes was born in Winnfield, Louisiana on April 24.1932 to Bertha McCain and Richard Holmes. He was the youngest of 2 sons. His older brother, Robert Ford, preceded him in death in 1984. In 1945, he moved to Detroit, Michigan with his... View Obituary & Service Information

The family of Dones Holmes created this Life Tributes page to make it easy to share your memories.

Send flowers to the Holmes family.