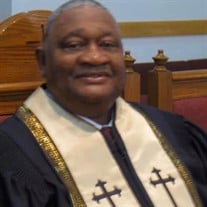 David Edgar Washington Sr. was born on March 15, 1939 in Grindstone, Pennsylvania to the late Percy and Lellia Washington. At an early age, David professed Jesus Christ as his personal savior at Mt. Zion Baptist Church in Grindstone, Pennsylvania. David was active in the church as a young boy, but it would be later that David would become a devoted servant and Pastor in The Church. David excelled in football, baseball and track and became the first black quarterback in the history of Brownsville High School. Through his athletic success, David became a hometown hero, which resulted in some ‘special’ meal preparation from his mom. This ‘special’ attention earned David the nickname “Baby Jesus” from some of his siblings. David went on to win a football scholarship at Pratt Community College in Pratt, Kansas where he became a Junior College All-American at the quarterback position. He then furthered his college football career at Kent State University in Kent, Ohio. After leaving Kent State and joining the Army where he served for three years, David moved to Cleveland, Ohio where one of his older brothers, Kenneth resided. It was in Cleveland, where David would find his greatest life treasure, his beautiful bride, Mary Elizabeth. They were married on August 21, 1965. They shared a love affair and unbreakable bond for 54 years. To this union, two children were born – Shelley and David Jr. David had a 30-year career at Ford Motor Company where he served in a variety of positions but primarily as a Supervisor in Labor Relations. He retired from Ford in 1997; however, his greatest life labor was still in front of him. During this time, David would go on to earn his Bachelor and Master of Business degrees from Baldwin Wallace College. Under the late Reverend Dr. James Emmitt Moss, of Springhill Missionary Baptist, David was licensed to preach the gospel in 1996. David served in various leadership capacities at Springhill including Sunday School Superintendent, Associate Minister, and Sunday School instructor. David later earned a Masters of Arts in Pastoral Ministries from Marygrove College. He would later go on to Pastor First Baptist Church of Amherstberg, Ontario Canada, and serve as Associate Pastors of St. Phillips Baptist Church and Davison Missionary Baptist Church. David also served for 10 years as the Senior Pastor of Shiloh Baptist Church in Pontiac, MI. before retiring. After which, David then transitioned to serve alongside his son, David Washington Jr. at Canton Christian Fellowship where he served as the midday Bible Study Teacher and “Big Papa”/Chief Advisor to anyone who would listen! David was not only a great husband, father, preacher and teacher, but he was also a community leader. He had a passion for coaching and teaching youth sports. David coached football, baseball and basketball and he has mentored and impacted hundreds of young men over the years. Many of those young men, saw David Sr. as not only a coach but a father-figure and life teacher. Preceding David in death were his parents Percy and Lellia Washington, brothers George, Willie Joe, Richard, Moses, Kenneth, Clarence, Clifford and sisters Viola Jenkins and Juanita Martin. On Wednesday, December 18, 2019, at 11:45 a.m., David departed from this side of heaven. He leaves to cherish his memory his beloved wife, Mary Elizabeth of 54 years; daughter, Shelley (Kenneth); son, David Jr. (Emeshe); and sisters, Frances, Esther (Donald) and Joan. He also leaves behind eight grandchildren, Gabriella, Hannah, Faith, Nathan, Joyelle, David III, Noah and Sekai; brothers-in-law and sisters-in-law, Phil Poe (Claretta), Fannie Mosley, Gladys Jenkins, Lillian Reeves (Joe), Mary Francis, Andrew Poe and David Poe (Roberta), as well a host of nieces, nephews, cousins, friends and a great brotherhood of pastors and preachers.

David Edgar Washington Sr. was born on March 15, 1939 in Grindstone, Pennsylvania to the late Percy and Lellia Washington. At an early age, David professed Jesus Christ as his personal savior at Mt. Zion Baptist Church in... View Obituary & Service Information

The family of Reverend David E. Washington Sr. created this Life Tributes page to make it easy to share your memories.

Send flowers to the Washington family.