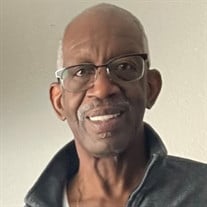 Clyde Barnes, affectionately known by his grandchildren as “Papa,” was born March 8, 1950 in Detroit, MI to the late Johnnie Barnes, Jr. and Annie Mae Barnes. Clyde was the fourth eldest sibling of twelve. His brother, Eugene Barnes preceded him in death. Clyde graduated from Northwestern High School on June 21, 1968 with honors of excellence in Architectural Electrical Engineering. On November 25, 1968, Clyde began his 31-year career at General Motors. This is where Clyde met Lorraine Hughes and the two were married on July 28, 1975. To this union, they raised 3 children: Chantel Hughes-Warren who preceded him in death, Lorenzo and Chiquita. In 1989, Clyde met Eleanor Marie McCoy and after many years of dating, the two made it official and were married on July 2, 2018. Clyde retired on November 1, 1999 as a Journeyman Tinsmith & Layout Sheet Metal Worker. After retirement, Clyde continued his studies, earning certificates and perfecting his craft. Serving in love, Clyde was the one everyone called to perform a task as simple as changing a lightbulb to installing a furnace. Clyde was generous with his talent sharing whenever he could. Often with the assistance of his very special friend like a son Roger Skipper. He loved family gatherings, gardening, and feeding people (making tempura vegetables, and frying turkeys, etc.). Clyde was loved and respected by many and his presence will be greatly missed. Clyde departed this life on Tuesday, January 18, 2022. The Spirit of Clyde Barnes was lifted by an Angel of Mercy to a place of peace, joy and eternal life. A place prepared by our Heavenly Father, free of pain, sickness and all earthy cares. Clyde leaves to honor and cherish his memory: his wife Eleanor; two children: Lorenzo (Zilola), Chiquita (Arthur); three step-children: Yaletta Reams (Reggie), Terria McCoy, Victor McCoy; ten siblings Danny (Doris), Floyd (Audrey), Selena (Anthony), Savanah (Winsley), Darscilla (Robert), Mary Ann (Gene), Joyce, Johnny, Gregory and Jerry; seven grandchildren, Henry III, Amari, Amir, Kai, Alivea, Enzo, Ezra; seven step-grandchildren, Tanisha, Donisha, Kenneth, Andre, Victoria, Alisha, Allaysha; one great grandchild Henry IV; three step-grandchildren, Darren, Christlynn, Zen; a host of nieces, nephews, relatives and friends. Zoom Instructions 1. Go to Kempfuneralhome.com. 2. Click on your loved one’s photo. You are now on their personal page. 3. You should see a tab labeled photo & videos (or it may be labeled media, depending on your device). Click that tab. 4. 5 mins before the service starts, you will see an icon labeled Webcast (or it may be labeled external video, depending on your device). Click the icon 5. You will begin to launch into the zoom meeting. 6. Wait for host to let you into the meeting.

The family of Clyde Barnes created this Life Tributes page to make it easy to share your memories.

Clyde Barnes, affectionately known by his grandchildren as “Papa,”...

Send flowers to the Barnes family.