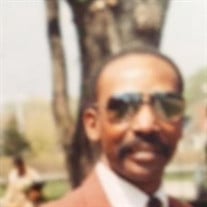 Charles Will Jackson, Jr. also affectionately known as Juney or Chuck, was the eldest of 3 children born to Charles and Annie M Jackson(Lewis) in Detroit, Michigan on July 29th 1944. Both of his parents preceded him in death. Charles, Jr. was a high-spirited youngster who was always with a large group of friends where he was usually the leader. He joined the US Army in 1960 at age 16 in hopes of channeling his spirited energies in a positive way. He began as part of the Airborne unit because he loved the freedom and excitement of jumping out of airplanes, and there he spent 6 years enjoying seeing the world abroad. He spent time in Europe and in several other cities in the United States before returning to settle in Detroit. Charles met and married Rolina, who preceded him in death and from their union Eric Jackson was born. He later met and joined with Yvonne (Bunny) Neely and from their union Kevin Neely Jackson was born. Charles, in joining with Yvonne, also became a surrogate father to Shonda. He confessed Christ during his adult years and was baptized. He spent his last 2 years in residence at the Hamilton Nursing Center for Veterans where his care was well provided for by wonderful staff and personal caregiver, Ms. Hermanita Henderson who took care of Charles as if he were her own father. His youngest brother Rudolphus preceded him in death. He leaves to mourn his passing, 2 sons Mr. Eric Jackson and Mr. Kevin Neely Jackson; three grandchildren, Brianna Jackson, Roneil Jackson and Taiya Grier and 3 great-grandchildren, Britiny, Troy and Tyrese; one sister, Mrs. Dorothy Edwards (Douglas); two sister-in-laws, Mrs. Teretha Jackson (Rudolphus), and Mrs. Barbara Turner, and an abundance of cousins, nieces, nephews and caregivers. Charles departed this life on Tuesday, April 22nd at Harper Hospital, Detroit Michigan. “A Fathers love is the greatest gift that he can give. It’s kind, it’s authentic and unconditional. It stands the test of time and every moment we spent together meant the most to me. I’m going to miss our talks and the knowledge that you shared. I will never forget you because I hold a special place for your in my heart. I love you Dad…” (Your son, Kevin) Let not your heart be troubled, ye believe in God, believe also in me. In my Father’s house are many mansions; if it were not so, I would have told you. I go to prepare a place for you. And if I go and prepare a place for you, I will come again and receive you unto myself, that where I am, there you will be also (John 14:1-3). WE ARE DEEPLY GRATEFUL FOR THE KINDNESS AND COMPASSION YOU HAVE EXTENDED TO OUR FAMILY DURING THIS DIFFICULT TIME. YOU HAVE TOUCHED OUR HEARTS IN SO MANY WAYS AND WE WANT YOU TO KNOW THAT IT WAS APPRECIATED. THANK YOU THE FAMILY OF CHARLES W. JACKSON, JR

Charles Will Jackson, Jr. also affectionately known as Juney or Chuck, was the eldest of 3 children born to Charles and Annie M Jackson(Lewis) in Detroit, Michigan on July 29th 1944. Both of his parents preceded him in death. Charles, Jr. was... View Obituary & Service Information

The family of Charles Jackson Jr. created this Life Tributes page to make it easy to share your memories.

Send flowers to the Jackson family.