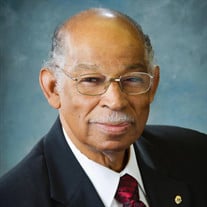 Charles James McKeithan Edmonson Sr passed away at home on January 24, 2022, at the age of 92. He was born in Detroit, in 1929, to Georgia (McKeithan) and John Henry Edmonson and was raised on the east side of Detroit with seven siblings. He married Clara Bolton and raised one child, Charles Edmonson, Jr. He later married Patricia Ann Smith (Johnson) and together, raised a daughter, Tracey Smith. Charles graduated from Cass Technical High School with a major in chemistry. While attending Wayne State University, he studied pre-law and was a member of the Omega Psi Phi fraternity. He continued his studies at Wayne while working multiple, simultaneous jobs, including property management and parks maintenance for the City of Detroit, before beginning his first career as a health inspector for Wayne County. While at the Health Department, he also served as a Hospital Corpsman in the US Naval Reserve. In the late 1960s, Charles joined the newly-formed Michigan Department of Civil Rights to investigate complaints of illegal discrimination. While working for the State, he completed Bachelor’s and Master’s Degrees in Urban Planning from Wayne State University. He retired from the Civil Rights Department in 2002. In retirement, Charles served on the board of directors and as a president of the Children’s Center of Detroit, and as a president and treasurer of the Detroit Renaissance Lion’s Club. He also pursued life-long interests in photography and woodworking. He had a profound dedication to his family and hosted many reunions and large family gatherings at his home, in fulfillment of his promise to help keep the family together. Charles was preceded in death by his siblings: Lois (Hepburn), Elizabeth (Calloway), Florence (Jackson), Betty (Price), John II (Mary), William (Adrienne) and David (Virginia). He is survived by his wife, Patricia; son, Charles Jr (Karen); daughter, Tracey Smith; and a very large extended family. A memorial will be held at a later date. Memorial contributions may be made to The Children’s Center of Detroit, by visiting: https://www.thechildrenscenter.com/individuals-families/honorariums-memorials/

Charles James McKeithan Edmonson Sr passed away at home on January 24, 2022, at the age of 92. He was born in Detroit, in 1929, to Georgia (McKeithan) and John Henry Edmonson and was raised on the east side of Detroit with seven siblings.... View Obituary & Service Information

The family of Charles James McKeithan Edmonson Sr. created this Life Tributes page to make it easy to share your memories.

Send flowers to the Edmonson family.