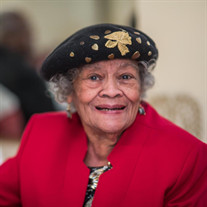 Bertha Lee Oliver was born February 22, 1925. She was one of 14 children born to the union of Fayette and Mary Mason. It was a time period known as the Roaring Twenties in our country. This period was also known as The Jazz Age, a time when, for some there was a prosperous economy and the 19th Amendment was passed granting women a legal right to vote. However, Black people endured struggles during this time as it was also was known as The Segregation Era. Few Southern Blacks were registered to vote as a result of intimidation, violence and discrimination. During these struggles and obstacles, Bertha’s father, Fayette Mason from Lexington, Mississippi found solace in God. As a minister in the Church of God in Christ (C.O.G.I.C) and a prosperous farmer, he and his wife Mary Mason raised Bertha and her 13 siblings, all of which preceded her in death, to be hardworking and God-fearing. She remembers her mother as a devout prayer warrior who called upon the Lord while walking through the house on a regular basis. As a child, Bertha attended Saints Industrial Literary School, a private school founded by the Church of God in Christ. Bertha socialized with her many siblings and friends from school. She was known as a hard worker who helped her parents take care of the many responsibilities that came with living on a farm, which included cooking, cleaning and outdoor work. Bertha’s friendly, yet plain spoken demeanor drew many to her. She made friends easily and thrived in social settings. As a teenager Bertha met Colby Oliver, Sr., the love of her life, at a church service. A few years later, Colby completed trade school but was drafted to the army shortly after graduating. After completing high school, Bertha traveled to Chicago and found employment at R.R. Donnelly with her sister, Mattie. After serving in World War II, Colby found employment at Wolverine Packing Company in Detroit, Michigan. Bertha & Colby were married in Chicago, Illinois on April 24, 1948. After marriage, Colby and Bertha relocated to Detroit. A year after they were married, she gave birth to their first child, Carthel and the following year she had a daughter, Veronica. Several years later she had her youngest child, Colby Jr. As Bertha settled into family life in Detroit, she decided to raise her children with a strong Christian foundation emphasizing prayer and a commitment to church attendance, especially Sunday School. She also made sure that all her children were involved in extra-curricular activities including music lessons, Boy Scouts, Girl Scouts and various sports. Her children described her as a firm disciplinarian and she also emphasized academic excellence in her home. All three of her children excelled academically and became successful adults. Bertha’s spirit of generosity often extended beyond her own home as she invited her grandchildren, nieces, and nephews for extended visits. During their formative years, Bertha’s children remember the aroma of delicious soul food that permeated their home as she took delight in making Sunday dinners for her family and close friends. In her spare time, she found joy in shopping at Eastern Market for vegetables, which she saved for the winter months. Her family also enjoyed driving to Chicago to visit relatives on a regular basis in the summer months. After her children grew up, Bertha found joy in working as a cook for The University of Detroit. She enjoyed serving the students and shared her love for the culinary arts with them. She also found more time to get involved in her church, Second Grace United Methodist Church. She served in groups such as the Methodist Youth Fellowship, as well as the United Methodist Women. In her later years, Bertha retired and opened her home to her grandchildren, the next generation of her family. She had a special and unique bond with each of her grandchildren. They remember her sound wisdom, baked cakes, pies and homemade rolls, as well as fun-filled summer road trips. Her family served as a source of support for her when Colby, Sr., her husband of 47 years, became ill and passed away in 1995. However, Bertha continued to be a source of support for her grandchildren even after they grew up and started families of their own. Bertha’s legacy will forever be her focus on God and family, and this can be exemplified in the “Sunday dinner” tradition that she and Colby Sr. started. She extended her love for cooking beyond her immediate family as she embraced the families of her in-laws and most of them lovingly referred to her as Mama or Grandma. She is known for always saying,” Family is everything.” Her love for family and God was a reflection of how she treated all who encountered her. She was blessed to have several caregivers who assisted her in her final years. Their dedication and faithfulness were truly a blessing. Some of these devoted caregivers include Lisa Moore, Seleana Boyd, Sandra Washington, Trina Thornton, Vivian Bryant, Linda Fiaona Quaicoe and Janet Ambonsah. Bertha is survived by her three children, Carthel (Patricia) Oliver, Veronica (Kenneth Sr.) Powers, and Colby Jr. (Pamela) Oliver. James Mason, nephew raised as a brother with her siblings; Her eight grandchildren, Kenneth Jr. (Lesley), Verneece (Nana Kwame), Keith & Tiffany; Kevin (Pandarinath), Corey (Marci ), Craig (Nikoe Danyal), Chalana & Mike; and Colvin & Ebony. Her eleven great grandchildren include Colby John, Corey Matthew, Kisea, Nana Kwame, Jr., Daniel, Nyja, Kevin Jr., Gabrielle, Bryce and Braiden (twins), Keith David; and a host of children, who affectionately referred to her as "Grandma" or "Great Grandma"; and many nieces, nephews and other relatives and close friends.

Bertha Lee Oliver was born February 22, 1925. She was one of 14 children born to the union of Fayette and Mary Mason. It was a time period known as the Roaring Twenties in our country. This period was also known as The Jazz Age, a time when,... View Obituary & Service Information

The family of Bertha Lee Oliver created this Life Tributes page to make it easy to share your memories.

Send flowers to the Oliver family.