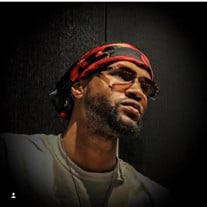 CELEBRATION OF AZAL BENNE' LOCKETT'S LIFE Azal Benne’ Lockett was born on September 9, 1992 in Detroit, Michigan to Walter D. Lockett and Portia M. Lockett. He was the second of three kings born to Walter and Portia. He attended Elois Home Day Care, Paul Robeson Academy and Faith Christian Academy during his early educational years. While in elementary school, Azal participated in the DAPCEP Program. Azal’s love for cooking started during his high school career at U of D Jesuit. He also attended Martin Luther King High, Troy High and he graduated from Avondale High School with a Culinary Arts Scholarship to Baker’s College. Azal was athletic, participating in numerous sports as a young boy on the Rosedale Park-Grandmont baseball team and The Detroit Police Athletic League (PAL) playing basketball. Azal had “game” as a middle-schooler, balling as a power forward and attending multiple sport’s camps including: Revie Sorey and Reggie McKenzie for football, Michael Finley, Richard Hamilton and Perry Watson for basketball. While attending Fellowship Chapel, where Azal was baptized at the age of eleven, he also was involved in Isuthu Mentoring Program and the Nasacare Drill Team. Azal and his family were featured on The National Geographic Series Worlds Apart where they lived in the Andes in Peru. This was a learning experience for Azal to not take anything for granted, respect the earth and appreciate being creative without using electronics. Azal had an entrepreneurial mindset from early-on, selling candy in elementary school, out-earning his own allowance from his parents. He worked for several catering companies, Beans & Cornbread and he also worked at St. Clair Mercedes Benz as a porter. Azal Benne’ Lockett was the CEO of A to Z Car Detailing where he serviced vehicles for Fox 2 television station. He moved to Atlanta to pursue his passion for music where he started his record label, GOAT Town Entertainment. Azal recorded three albums Sucka Free, Billiano World and Billiano World 2, with four albums worth of unpublished music. Known in the music industry as Chase Billiano, Azal volunteered for and was instrumental in the success of Dilla Day Detroit 2018, a celebration of the Internationally renowned J Dilla. In addition to his music career, Azal created a clothing line, which included accessories such as scarfs, hats, jackets, cordless phone chargers, and masks. Utilizing his “hustle-spirit”, Azal sold his albums and his apparel in the local malls. He was fearless when it came to promoting his passion products and would not miss an opportunity to make money and earn a living while still maintaining good relationships with his family and friends. Azal loved cooking, music, traveling, sports and fashion. He also had a passion for food and was in fact an eating machine. He was known for his kind heart and loved to kiss and tickle all his little cousins making everyone feel special. He never ended a conversation or left your presence without saying…I love you. Azal always said he knew when his mother was praying for him and he loved God. Azal was never still, always motivated! As a family, we are heartbroken, yet we know that he is in the Presence of God. We will miss his endearing hugs and kisses as a family. He leaves to cherish his memory, his mother, Portia M. Lockett, his father, Walter D. Lockett, his two brothers, Asa Darnell and Ankur Porter Lockett, two aunts, Brenda Boone and Gha’il Benjamin Rhodes, two uncles, Willie McIntosh, Jr. (Pat) and Darryl Griffin Simmons (Tonya), two great aunts, Helen Brown and Ellen Johnson (Otis), a host of cousins, loved ones and friends and the love of his life and the mother of his future child, Alyssa Allen. Please leave a video memorial tribute for Azal Lockett at the link below https://www.tribute.co/azal-lockett/?fbclid=IwAR1-DzhuzoCGmREH71P43X3evxhcFE4r7RefjvLJbsLxOxWAqa0wWebOT3U

CELEBRATION OF AZAL BENNE' LOCKETT'S LIFE Azal Benne&#8217; Lockett was born on September 9, 1992 in Detroit, Michigan to Walter D. Lockett and Portia M. Lockett. He was the second of three kings born to Walter and Portia. He attended Elois... View Obituary & Service Information

The family of Azal Benne' Lockett created this Life Tributes page to make it easy to share your memories.

Send flowers to the Lockett family.