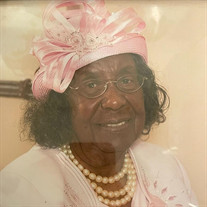 THE OBITUARY OF ARLENE STARGHILL Arlene Millner Starghill was born on December 13, 1918 in Algoma, West Virginia. Her loving parents were the late Henry H. Millner and Janie Millner Davis. Arlene was a loving and obedient child loved by all her family. She joined the Methodist Episcopal Church at the age of 12, where she served faithfully as a secretary to the youth department and sang in the youth choir. In the year of our Lord, November 22, 1936, she was united in holy matrimony to the late Otis Clayton Starghill Sr. They celebrated 72 years of marriage together and were together until his passing. To this union five children were born, Walter Starghill (Denise), Otis C. Starghill, Jr. (Jewelle), Janice Starghill Keel (Alvin) Gene M. Starghill, and Susan A. Starghill Lyons (Norman). Arlene and Otis moved the family from West Virginia to the west coast in Vancouver, Washington where she worked in the Kaiser Shipyards in 1942 building ships for World War II. They later settled in Detroit, Michigan as their home in 1946. Arlene attended school in West Virginia and later completed her studies in Detroit. She was employed by Sears, Roebuck & Company for several years. Her Christian Works Deaconess Starghill joined the House of God Church Keith Dominion in 1948 and received the baptism of the Holy Ghost the same year. She was ordained as a Deacon in 1971. She worked with the Young Peoples Christian Association and organized the Missionary Department in Pontiac, Michigan under the Late Bishop J. Thomas. She was also the founder and President of The Mary Magdalene Club. She has served in the following local offices within the church: Church Reporter, Church Announcer, Chairman of the Building Fund, Food Committee Chairman, Trustee Board Secretary, Church Treasurer, and Chairman of the Deacon Board for 17 years. She served faithfully as President of the International Missionary for Michigan Diocese #1 for 31 years and was the local Missionary President at the Mount Elliott Church where she worked faithfully for 28 years. In 1955 she was appointed State Secretary and State Agent of the Michigan Diocese under the late Bishop J. Thomas. On the national level, she served as Chairman of the International Missionary Outreach Society’s Publicity Committee. Deaconess Starghill was a recipient of the Keith Dominion Award, which is the most prestigious award given by the House of God Church, recognizing over 50 years of outstanding achievement under three Chief Overseers. Deaconess Starghill devoted her whole life serving Christ as a truly humble and faithful servant who entered the joy of the Lord. Deaconess Starghill had many friends in her church family and was loved by those she met. She always had a word of encouragement to those who needed comforting. She will be greatly missed, and we will always cherish the memories of Deaconess Arlene Starghill. Her works will never be forgotten and most of all, we know we will see her again in the great and beautiful day when Jesus comes. God decided her work was well done and she surrendered to God’s call on December 19, 2021. Loved ones who preceded her in death were her husband Otis C. Starghill, Sr., stepson Robert E. Starghill, daughter-in law Betty Starghill, and step-grandson Britt A. Starghill. She leaves behind the following loved ones to cherish the years of her life: her children Walter Starghill (Denise), Otis C. Starghill, Jr. (Jewelle), Janice Starghill Keel (Alvin), Gene M. Starghill, and Susan A. Starghill Lyons (Norman); 15 grandchildren; 18 great grandchildren; 19 great-great grandchildren; 2 great-great-great grandchildren; many cousins; and many godchildren. “I must work the work of him that sent me, while it is day: the night cometh when no man can work.” John 9:4. Live Stream for Arlene Starghill's Funeral January 8, 2022 ﻿ https://youtu.be/YZ4ByqvkWrA Face Masks required for Visitation Homegoing Service

THE OBITUARY OF ARLENE STARGHILL Arlene Millner Starghill was born on December 13, 1918 in Algoma, West Virginia. Her loving parents were the late Henry H. Millner and Janie Millner Davis. Arlene was a loving and obedient child loved by all... View Obituary & Service Information

The family of Arlene Starghill created this Life Tributes page to make it easy to share your memories.

Send flowers to the Starghill family.