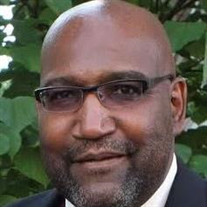 Anthony Ransom Hubbard (Tony, also affectionately known as "Hubb") was a kind, loving man who left a mark upon the lives of everyone he met. Tony was born to the union of Herman Franklin Hubbard, Jr and Madeline Ada Ransom in Dayton, Ohio on November 6, 1954. He was the second of four children and the only boy. Tony grew up in Springfield, Ohio. He accepted the Lord as his savior and was baptized at Mount Zion Baptist Church at the age of eight. After graduating from Springfield South High School, he went on to study Marketing and graduated from Xavier University with a Bachelor of Science in Business Administration (BSBA). He also earned a Master of Business Administration (MBA) from Xavier University. Tony excelled as an athlete, playing for the South High School Wildcats and going on to play Division I College Basketball for the Xavier University Musketeers. Shortly after moving to Michigan, Tony met Theresa Hunt. They wed in 1980. Tony and Theresa's union was blessed with a daughter, Tenai Elizabeth. Tony began his career as a Sales and Project Management professional in the automotive industry. He worked at General Motors and Delphi Automotive. Eventually, Tony's passion for helping children lead him to education, where he had an extraordinary impact on the lives of children and families. Tony served as the Regional Vice President for The Leona Group- one of the largest education service providers in the United States. Most recently, Tony served as Principal and School Leader at the Detroit Public Safety Academy (DPSA), a middle school and high school based in Detroit, Michigan. Tony loved his family dearly. More than anything, Tony cherished spending time with his daughter Tenai and his young grandsons Jerry III and Justin. Their weekend visits were dubbed "Pizza with Papa." As his family and friends can attest, Tony was a rock-- ever reliable, always encouraging, and always there when needed. Tony departed this life suddenly on Friday, May 14, 2021 at Detroit Receiving Hospital in Detroit, Michigan at the age of 66. He was preceded in death by his parents Herman and Madeline Hubbard, and his sister Harriet Shepherd. Tony's beautiful life will forever be remembered and cherished by his daughter Tenai (Jerry Jr.) Johnson; his sisters Michele (Donald) Mills and Lisa (Donald) Kavanaugh; his grandsons Jerry Johnson III and Justin Johnson; his former spouse Theresa Hunt; his special friend Nyeashea Redmond and a host of devoted nieces, nephews, aunts, uncles, cousins, and friends.

Anthony Ransom Hubbard (Tony, also affectionately known as "Hubb") was a kind, loving man who left a mark upon the lives of everyone he met. Tony was born to the union of Herman Franklin Hubbard, Jr and Madeline Ada Ransom in Dayton, Ohio on... View Obituary & Service Information

The family of Anthony Ransom Hubbard created this Life Tributes page to make it easy to share your memories.

Send flowers to the Hubbard family.