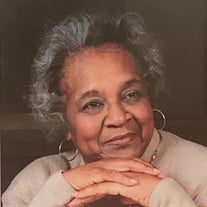 Please encourage the Curl family with words of Love and sympathy on our Tribute page. Ann Ester Curl, known affectionately as, “Ann” was born on November 23, 1931 in Memphis, Michigan to the union of Eugene and Cornelia Henry, both of whom preceded her in death. Ann was the third daughter and 6th child of 11 children. During her younger years, the family migrated to various cities in Northern Michigan including Detroit, Michigan, where she graduated from Miller High School. At a young age of 24, she married the love of life, James Lee Curl who preceded her in death after 30 years of marriage. The Lord blessed this union with three daughters: Karen Denise, Karalee, and Krystal Ann. While raising her girls, Ann attained gainful employment with the United States Tank Automotive Command (TACOM). After a successful career of 35 years of dedicated service, Ann retired as a Contract Manager. During her retirement, Ann could not be still. Her love for giving and taking care of people led her to volunteering at several hospitals as a candy striper. She also enjoyed watching court TV shows and as a result volunteered to work as an intern on “Ruth to the Rescue" and for the 34th District court. Ann accepted Jesus Christ as her Lord and Savior, and her faith in God never wavered. As a dedicated steward of the Lord, she was a member of People’s Community Church for 25 years where she served on the Progressive User Board and was a member of the Voices of Inspiration Choir. Later in her life, Ann moved to Southfield and joined John Wesley’s AME Zion. She joined the choir, and served as a member of the Lay Council and was awarded Life Member by the Connectional Lay Council A.M.E. Zion Church. Ann served as a devoted and faithful member for 10 years. Ann had many hobbies and mostly enjoyed spending them with her sisters. They could be found together playing cards, golfing, bowling, square dancing, and traveling. Ann had a wicked sense of humor and was always known for her quick wit. Ann left this world on February 13, 2021, surrounded by her loving family in her home. The kingdom will be blessed by her presence. She leaves to cherish and celebrate her memory: three devoted daughters, Karen Denise Curl-Stepney, Karalee Tabron, and Krystal Ann Upshaw; four devoted grand-daughters, Lauren Tabron, Elyse Stepney, Kalynn Tabron, Kameron Upshaw; one great grand-daughter, Avery Poindexter; two loving sisters Elizabeth Abrom and Blanche Shelton and caring brothers, Robert Henry, Eugene Henry and Donald Henry and host of nieces, nephews and other relatives and friends.

Please encourage the Curl family with words of Love and sympathy on our Tribute page. Ann Ester Curl, known affectionately as, &#8220;Ann&#8221; was born on November 23, 1931 in Memphis, Michigan to the union of Eugene and Cornelia Henry, both... View Obituary & Service Information

The family of Ann Ester Curl created this Life Tributes page to make it easy to share your memories.

Please encourage the Curl family with words of Love and sympathy...

Send flowers to the Curl family.