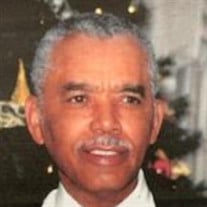 Mr. Andrew Woods made his transition on Thursday March 11, 2021 in Detroit. Please send words of Love and Condolence to the Woods family on our Tribute page. LIFE REFLECTIONS   REMEMBERING Andrew “Man” Woods   “…To be absent from the body is to be present before the Lord.”  2 Corinthians 5:8   Andrew Woods was born on December 14, 1935 in Tunica, Mississippi to the parentage of the late Alexander and Mary Ferguson Woods. He was the oldest son of 15 siblings, nickname “Man”.  As a child, he was united in Christ and attended Saint Paul Christian Methodist Episcopal Church, Buena Vista, Georgia.   He was educated in the Buena Vista School System and moved to Detroit, Michigan at age 17, joining the National Guard at age 19. He held various jobs until he was hired at Detroit Diesel in 1966. He was affectionately called “Andy” by his coworkers.  He retired from Detroit Diesel (a company acquired by General Motors) as a General Foreman.    He particularly loved to talk about the work he did for Greenfield Construction and Diponio Contracting, laying pipes underground in the early 1960's. In recent years, on almost every car ride around Metro Detroit, he would reminisce about the area and how it looked when he was working.  He took great pride in his work.  After retiring from General Motors, Andrew wanted to remain in touch with the community and began his landscaping company AW Lawn Maintenance.  He was a kind, generous, and well-respected man by his customers.  In addition to maintaining his customers’ lawns, he would also care for the lawns of several of his long-time neighbors.   Andrew was a man who loved God. He had a strong sense of family, which was grown from a consistent and powerfully felt love for all those within it. His strong belief in God “was shown by the love and care” he had for his wife and family.  His untiring work ethic allowed him to work at his lawn maintenance company until the age of 83. In fact, if he ever said he could do something, there was never any doubt that he could.     Everyone knew Andrew’s  favorite past time crafts of building things and remodeling gave him pride and much joy.  His southern roots always welcomed the taste of home cooked food by his wife Johnnie, who fixed his every plate and put before him daily.  He had a special taste for eating homemade cakes, blueberry cobbler, and especially sister Azzietta’s fried peach turnovers as well as a love for hot tea. At the end of the day he loved talking many hours on his flip cell phone to his family and friends.    Andrew felt recreation was an important part of living. He owned a motor coach and belonged to a Recreational Vehicle (RV) Club. He traveled around the country to his favorite vacation spots, among which was St. Petersburg, Florida, a spot he frequently visited with the love of his life, wife Johnnie. He also enjoyed visiting his hometown of Buena Vista, Georgia and visiting family members in Atlanta and Macon, Georgia. He was a proud, strong and humble family man who worked hard, enjoyed life fully and will be greatly missed by all those who knew him.   On Thursday, March 11, 2021, Andrew's spirit and soul entered into heaven after a lengthy illness. Left with his everlasting memories: his loving and devoted wife of 60 plus years, Johnnie Mae Woods; three children: Andrea Woods, husband, Bobbie McBride (deceased son in Law) and their son Justin of Detroit, MI.; Andrew Woods Jr. his two sons Andrew, Devon and his daughter Ciera, Detroit, MI.; Leslie Woods, husband Dr. Roy Elrod and their two sons Christopher, Jonathan and daughter Bria, Detroit, MI.; siblings: Azzietta W. Iriving, Atlanta, GA., Eddie Woods, Buena Vista, GA., Felton (Gussearl) Woods, Decatur, GA., Willie C. (Mary A.)Woods, Atlanta, GA., Daniel(Joyce) Woods, Stone Mountain, GA., Paul(Sandra)Woods, Atlanta, GA., Martha Ann Flournoy, Detroit, MI., Joyce A. Woods, Detroit, MI., Mary E. Woods, Stone Mountain, GA., Beverly V. Woods, Buena Vista, GA., Roger (Teya) Woods, Chesapeake, VA., Dianne W. Patterson, Macon, GA., one Aunt, Ethel F. Laster, Detroit, MI,  and a host of nieces, nephews, other relatives and friends. Andrew was preceded in death by his parents, Alexander and Mary Ferguson Woods, two brothers: Chester Woods, James A. Woods and two nieces: Eleanor Irving and Danita Woods.

The family of Andrew Woods created this Life Tributes page to make it easy to share your memories.

Send flowers to the Woods family.