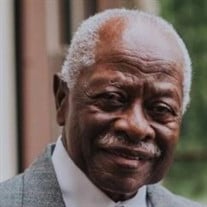 Mr.Alton El-Amin made his transition on July 11, 2021. Please encourage the El-Amin family with words of love and condolence on our Tribute page. Mr. El-Amin service will be available for livestream on Saturday July 17,2021 12:30pm. Alton El-Amin (formerly Williams) was born April 20, 1935, in Yellow Pine, Louisiana. Alton was the eldest son of seven children. His family moved to Detroit, Michigan when he was eleven years old. He attended Detroit Public Schools and graduated from Southwestern High school. In 1951, he enlisted in the United States Marine Corps at age eighteen and served three years. After returning from military service, he married in 1959. Of this union seven children were born. 1980, he changed his family name to El-Amin and became a devoted member of Islam. In 1990, after 31 years of marriage he suffered the loss of his beloved wife. Always a family man, he married in 1996. Alton was a hard-working man, always working and providing for his family. He worked thirty-seven years for Detroit Public Schools; twelve years for Wayne State University; and ten years with the City of Detroit as a First Class Stationary Engineer. Many coworkers referred to him as “Chief” because he was the chief engineer of mechanical operations. He was a religious, caring, compassionate and generous man. He was always looking out for the wellbeing of others. He leaves to cherish his memory, his loving wife, seven children, three stepchildren, twelve grandchildren, seven step-grandchildren, three great grandchildren, seventeen step-great grandchildren; two sisters, and a host of nieces, nephews, cousins, and former coworkers. He was preceded in death by his three brothers, his sister, and grandson.

Mr.Alton El-Amin made his transition on July 11, 2021. Please encourage the El-Amin family with words of love and condolence on our Tribute page. Mr. El-Amin service will be available for livestream on Saturday July 17,2021 12:30pm. Alton El-Amin... View Obituary & Service Information

The family of Alton El-Amin created this Life Tributes page to make it easy to share your memories.

Send flowers to the El-Amin family.