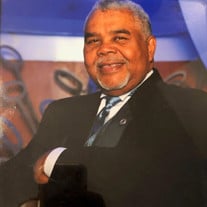 Alexander D. France was born on February 5, 1947 to the union of Ora Lee and Alex France in Detroit, MI. He made his peaceful transition on October 30th while in William Beaumont Royal Oak Hospital. Alexander was a member of Fellowship Chapel. He loved and was a faithful member of the Paul Roberson Chorus. Alexander grew up in the Detroit area and attended the Detroit Public Schools, graduating from Pershing High School and went on to further his education at Virginia State College (now Virginia State University). After graduating from college, Al worked at Standard Oil and in 2002 retired from General Motors. In 1995, he married the love of his life, Dianne. This union was compassionate one of loving each other over 26 years and of traveling the world. Al and Dianne with many friends visited all continents except one and has visited places such as Alaska, Amsterdam, Australia, Bahamas, Cambodia, China, Fiji, France, Germany, Hong Kong, India, Italy, Martha's vineyard, New Zealand, Russia, South Africa, Spain, Thailand, Vietnam, most of the Caribbean Islands plus many more countries and cruised all over the world. Out of all the many places that he traveled, Al loved a recent July 2021 vacation with family and friends in Jamaica to renew his wedding vows of 26 years to Dianne. He loved Kappa Alpha Psi Fraternity, Inc., Pontiac Alumni Chapter and served for many years on the Pontiac Kappa Foundation board. He loved playing Bid Whiz, playing pool, singing, taking care of his Mother-in-Law and being around people. He always had a smile on his face and was always upbeat and walked with a positive attitude about life. Alexander was affectionally also known as Beater and one of his favorite sayings was "Without a Doubt". He was preceded in death by his parents Alex and Ora France, his sister Cleona Donan, a brother Melvin France and his loving daughter, Brandi France. Leaving to carry on his memory and keep his positive demeanor alivve is his loving wife, Dianne Purty France; two sons, Elliott Purty and Andre Morgan. His grandchildren - Ahmaya Purty and Trejuan Purty which affectively calls him Papa. A special sister, LeeEllen France and two brothers, Charles Vergel (Toni), William Jackson (Cartrell); many sisters and brother-in-laws, a host of nephews and nieces, adopted Delta daughters, many special friends including lifelong friends; Darcel, Frank, George, Robert and Ross and many other relatives. From Dee to My Dear Al, please remember "Life has to end but Love doesn't" Mitch Albom My love for you is never ending and everlasting Please encourage the France family with words of love and encouragement on our Tribute page. In lieu of flowers, please make a donation to the Alexander D. France Scholarship fund to the Pontiac Kappa Foundation P.O. Box 430144 Pontiac, MI 48343.

Alexander D. France was born on February 5, 1947 to the union of Ora Lee and Alex France in Detroit, MI. He made his peaceful transition on October 30th while in William Beaumont Royal Oak Hospital. Alexander was a member of Fellowship Chapel.... View Obituary & Service Information

The family of Alexander De Hall France created this Life Tributes page to make it easy to share your memories.

Send flowers to the France family.