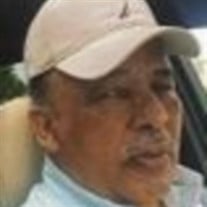 Al Peck was born in Detroit, Michigan on October 17, 1942, to the parents of Peggy Peck and Cleveland Allen Peck, both preceded him in death. As an only child, Al was adored by his parents and close family. As a young child, Al, often attended service with family at the City Temple of the Seventh Day Adventist Church. Al attended the Detroit Public Schools, graduated from Northwestern High School. He then joined the U. S. Army and served in Germany during the Berlin Crisis in 1961 and received an honorable discharge. Al obtained a Bachelor of Arts in Psychology in 1981 from Wayne State University. After the discharge from the Army, Al was employed for a brief time by the Ford Motor Company where his father served thirty years during his tenure. Al started and graduated from the Detroit Police Academy from 1964. During his tenure he was promoted to Sergeant in 1984. Al's law enforcement career spanned 42 years, and he retired in 2005. Al was employed for ten years by Macomb County Government as a Protective Officer until 2015. While Al attended Wayne State University in 1976, he met and fell in love with Marjorie Ann Jennings, "The Best Thing that ever Happened to Him," as he often said. In 1982, Marjorie and Al were married. The two were inseparable. This year is the celebration of their forty years in marriage. They loved each other, respected one another, and looked out for one another. To this union was born a son, Allen Christopher Peck in 1984. He was an only child and was also adored by his parents and family, like Al. Al was always full of wisdom and knowledge and willing to help others. Al was cool, calm, and collected. Al referred to himself as "Al the People's Pal" and he truly was. Everybody loved Al. Al's interests were diverse. He enjoyed all genres of music from jazz, classical, old standards and rhythm and blues. Al was an avid boxing fan, so much so, that he traveled to Zaire, Africa to see Muhammad Ali in a grand championship fight with George Forman. (Rumble in the Jungle in 1974.) Al leaves to celebrate his life, his loving wife that he often called "smart and beautiful," his son, Allen Christopher Peck, of whom he was so proud and with whom he had a special bond. In 2015, Al's only granddaughter was born, Ava Christine Peck whom he loved and treasured tremendously. Ava liked to play pranks with her grandfather, making both incredibly happy! Ava, he also called "smart and beautiful"! His family was everything to him. Also, Al leaves to celebrate his life his sister-in-law Alice Jennings-Edwards and brother- in- law, Carl R. Edwards whom he loved and cherished. He leaves his best friend whom he considered a brother, John Holmes (Joyce) with whom he shared a lifetime of experience. Al will be missed by an abundance of cousins, nieces, and nephews and close friends who he loved, and they loved him back. He always had a kind word and time to listen to others.

Al Peck was born in Detroit, Michigan on October 17, 1942, to the parents of Peggy Peck and Cleveland Allen Peck, both preceded him in death. As an only child, Al was adored by his parents and close family. As a young child, Al, often attended... View Obituary & Service Information

The family of Al Peck created this Life Tributes page to make it easy to share your memories.

Send flowers to the Peck family.