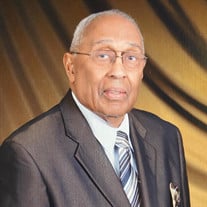 Dr. Addis Cordell Taylor, Jr. (1936-2021) Addis Cordell Taylor was born on July 1, 1936, in Mount Kisco, New York. His parents, Addis Cordell Taylor, Sr., and Katherine Evelyn Taylor (nee Mills) had recently moved north from Georgia during the “Great Migration.” He departed from this life on Wednesday, August 11, 2021. Addis began kindergarten in Mount Kisco, but in 1942, at the age of 6, he and his parents moved to Buffalo, New York, and Addis entered first grade at P.S. 32. In 1945 he transferred to P.S. 31, where he graduated from the eighth grade in 1950. From there he entered Buffalo Technical High School (now called “Hutch-Tech”) and graduated in 1954. Addis began his collegiate studies at the University of Buffalo, but he received his Bachelor of Science degree from Empire State College. He went on to receive his Master of Education from Florida A and M University, and a Ph.D. from Florida State University. In 1956 Addis married the former Jeanne Legge (1936-2009). From that union came two children: Natalie Taylor Cross and Dr. Steven Jeffrey Taylor, and a son-in-law, Melvin Charles Cross, Sr. Addis and Jeanne had two grandchildren: Melvin Charles Cross, Jr. and Dr. Tamika Katherine Cross. They also had two great-grandchildren: Melvin Charles Cross III and Maddox Tristan Cross. During his life, Addis had an illustrious career, which he began by working at various factories in the Buffalo, New York area, eventually reaching the position of Labor Relations Manager at Spaulding Fiber, in Tonawanda New York. In 1973 he moved to the area of higher education and served as the Manager of Employee Relations at the University of Buffalo. From there he moved to Washington, D.C., where he was the Director of Education and Training for the American Arbitration Association, and later was the Executive Director of the Public Employee Relations Board of the District of Columbia. He returned to higher education and became a professor at Florida A and M University, where he taught courses in labor relations and economics. He eventually rose to the position of Chair of the Department of Economics. While at FAMU, he established the Center for Human Resources Management. Professor Taylor retired from FAMU in 2001 and moved to Kissimmee, Florida. Having professed Christ as his Savior while living in Tallahassee, when he moved to Kissimmee, he joined Parkview Christian Life Center. He remained a member of that church until 2019, when he relocated to Southfield, Michigan to live with his daughter and son-in-law. In 2020, after the onset of the pandemic, Addis began attending (virtually) Pilgrim Baptist Church, in Silver Spring, Maryland. He faithfully attended Sunday school, weekly service, and Wednesday night bible study, never missing any of the services or bible studies. While living in Michigan, he became an avid bible reader, and he also cultivated his interest in model trains. He spent hours upon hours making additions to the train set that was first given to him in the 1940s. Dr. Addis Taylor is survived by his daughter Natalie Taylor Cross and her husband Melvin Charles Cross, Sr., his son Dr. Steven Jeffrey Taylor, his sister Bernadette Riley, his grandson Melvin Charles Cross, Jr. (and his devoted wife Maki Cross), his granddaughter Dr. Tamika Katherine Cross, his great-grandsons Melvin Charles Cross, III and Maddox Tristan Cross, and many loving nieces, nephews, cousins, and friends.

The family of Dr. Addis Cordell Taylor Jr. created this Life Tributes page to make it easy to share your memories.

Send flowers to the Taylor family.